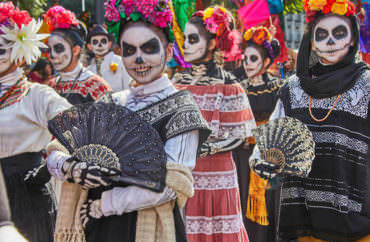 Are you a fan of Día de Los Muertos, the Mexican holiday that looks kind of like Halloween?

Through conversation with faculty and students alike, the Inter-Club Council (ICC) has been made aware that the theme of “Día de Los Muertos” inadvertanely devalued a culturally important event celebrated by many of the College’s student subpopulations.  Additionally, due to the sale of food and other items during Coast Day, members of the campus community expressed a sense of cultural appropriation, which further exploited this culturally important event for many of our students.

It will correct this “inadvertent cultural devaluation” by changing the theme to “Peace, Love & Bones,” ICC President David Vo wrote to student clubs and organizations:

In order to avoid any exploitation of a culturally important event, the ICC respectfully requests that student clubs and organizations do not exhibit any displays, decorations, banners, products, food, costumes, face paintings, or any symbols that may relate to Día de Los Muertos.

It will give each club “up to” $20 to change its items to match the new, inoffensive theme.

A reader who forwarded the email to The College Fix said the recruitment day is “centered on multiculturalism.”

You may remember Orange Coast College for suspending a student who recorded his professor’s classroom rant against President Donald Trump, and then lifted the suspension following a public outcry and legal threats against the community college.

MORE: Universities tell students what not to wear for Halloween