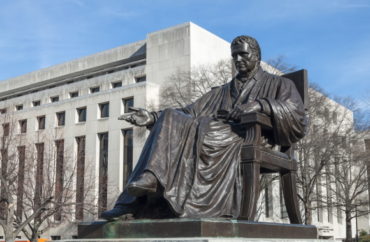 Before it became codified and bureaucratized by the Catholic Church, excommunication could be a very public act. The hurled anathemas were not just a matter of private faith but public orthodoxy.

In a few cases where things got carried away, people even dug up corpses and declared them anathema again, to really make their point.

Fortunately we’ve evolved beyond that. Instead of digging up corpses, we rename law schools.

On this Canada Day, July 1, it will drop the name of the great American statesman and become simply University of Illinois Chicago School of Law.

Why? The university spelled out the decision in a May 20 news release.

“Despite Chief Justice Marshall’s legacy as one of the nation’s most significant U.S. Supreme Court justices, the newly discovered research regarding his role as a slave trader, slave owner of hundreds of slaves, pro-slavery jurisprudence, and racist views render him a highly inappropriate namesake for the Law School,” the school explained.

The school was not exaggerating Marshall’s huge legacy.

Marshall was a US secretary of state and the first major biographer of George Washington. He was also the long-serving fourth chief justice of the United States Supreme Court, from 1801 to 1835, under whom the principle of judicial review was established.

Judicial review is the regime under which the Supreme Court decides whether or not laws are constitutional. Before the principle was established, the president was supposed to serve as a guardian of the Constitution by vetoing laws that didn’t pass constitutional muster.

The decision establishing judicial review, Marbury v. Madison, changed the course of the court and the country by making the judicial branch much more powerful. This elevated the place of law in America. It’s entirely possible that, without Marshall, there wouldn’t have been a law school to use to punish Marshall’s proverbial corpse.

Even Marshall’s most effective modern critic concedes his greatness. Paul Finkelman is a historian and president of Gratz College whose research into Marshall’s slaveholding showed it to be far more extensive than previously thought.

Finkelman’s research, published in a book by Harvard University Press and featured online by the University of Chicago Law Review, along with our present iconoclastic moment, is why the John Marshall sign is coming down from that law school.

Here is what Finkelman has to say about Marshall’s importance:

Chief Justice Marshall is rightly considered our greatest chief justice. For nearly three and half decades—longer than any other chief justice—this icon of constitutional history led the Court, shaping our law. Two centuries later his jurisprudence lives on. Five of the ten opinions most cited by the Supreme Court itself are Marshall’s.

Given that, and the fact that it was already well known that Marshall was a slaveowner, why is such a legal lion being hunted now?

Finkelman has two arguments for lowering our estimation of Marshall.

The second argument is that Marshall’s slaveholding had a horrible effect on his rulings from the bench.

The argument that slaveholding affected Marshall’s jurisprudence may very well be true, though Finkelman’s case reads more like a prosecutor’s brief than a balanced treatment.

His two articles on the University of Chicago Law Review website minimize the concessions that Marshall made to the anti-slavery side and leave out the case of Pleasants v. Pleasants.

Pleasants v. Pleasants is described by the Encyclopedia Virginia as the “largest legal case in U.S. history involving the manumission of enslaved people.”

According to the Encyclopedia, in that case, antislavery activist Robert Pleasants had “encouraged his father and half-brother to write wills in the 1770s freeing their slaves contingent on the passage of a Virginia law in which such a manumission became legal.” The Virginia legislature did that in 1782 but “surviving family members did not fulfill their responsibilities, causing Pleasants to sue and leading to the eventual freedom of at least 400 men, women, and children.”

Pleasants’s lawyer in this matter was John Marshall.

Lawyers often take cases where they disagree with their clients, but they are rarely forced to take cases. Many lawyers will refuse to represent you if they believe too strongly in the other side. Marshall took the case and represented his client ably, gaining the freedom of hundreds of slaves.

That matters at least a little bit, not because it shows that Marshall was anti-slavery as a justice, but because omitting this case allows Finkelman to cast some words and actions of Marshall in the darkest shadows.

I do not want to detract from Finkelman’s scholarship here. He made a real contribution to our knowledge of an important historical figure by sifting through a lot of often confusing records. Bravo to him for that.

And his argument does have some force. When Finkelman writes from business records, “As he had in 1784, Marshall spent July 4, 1787 buying slaves—this time a woman and her child,” he scores a pretty solid hit, in my book. To mark our national day of independence by buying slaves is simply grotesque.

If Marshall’s slaveholding was why his name was on that law school, I would be all for pulling it down. So would most people of goodwill.

However, his overall legacy was a whole lot bigger than this very clear failing on Marshall’s part. I wish the folks currently hurling anathemas at him could understand that.