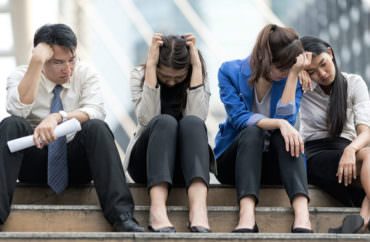 But leaders get huge pay bumps

Earlier this year DePaul University was given the first-ever “Lifetime Censorship Award” by the Foundation for Individual Rights in Education for its long, inglorious history of punishing and suppressing mostly conservative speech.

The nation’s largest Catholic university – which doesn’t want students to hear about radical Islam’s threat to gay people, vandalism against pro-lifers or criticism of race preferences – has appeared with regularity on FIRE’s annual list of the worst colleges for free speech.

Recall that it forced the College Republicans to pay a hefty security fee for a speaker two years ago – and then its security refused to protect the speaker.

Its left-wing strain of Catholicism used to simply alienate self-identified Catholics, but now it’s having more trouble getting anyone to come to the Chicago campus.

Conspicuously missing from its “newsroom” portal: DePaul is slashing dozens of staff positions to “place the university in a better long-term position to invest in strategic growth,” according to a statement to staff Thursday obtained by the Chicago Sun-Times.

The 62 full- and part-time staff members are mostly in administrative support roles, and they represent 3.5 percent of non-faculty workers. The statement didn’t specify exact positions. The school avoided the ire of its faculty by sparing them any layoffs.

Referencing Ramadan, the Muslim holy month of fasting, introspection and prayer, @RamiNashashibi (@imancentral) encouraged Saturday's #LAS/@SNLDePaul graduates to reflect on and practice the concept of calling out and calling up.#DePaulGrad2018🔵🔴🎓

Many thanks to @DePaulU for the tremendous honor, acquiring this PH.D was so much smoother than my first one – no papers, agonizing preliminary exams or defense committees this time around – much love & congrats to all the DePaul grads & their families! pic.twitter.com/q6WCWhjZuu

Some staffers were expecting layoffs of “at least” 200 based on rumors floating around last month, according to The DePaulia, describing “a culture of fear and opacity on the part of the university regarding their employment.”

One employee described duties that were “slowly stripped away” over the past six months: “If you take everyone’s work away, you can justify getting rid of them.” A professor told the school paper that even security guards were asking if their jobs were safe.

A consultant who has worked for DePaul thinks that falling enrollment at the school, which “grew extremely fast” over a short period, is the culprit. Its peak enrollment of more than 16,000 students in 2012 had fallen to 14,816 by 2017.

The DePaulia also highlighted “lucrative salaries” for many employees ahead of the staff cuts, an average of more than $400,000 for “top paid” employees:

It spent $480,000 on a single component of its new brand advertising campaign – its ad buy with the Chicago Transit Authority, according to the paper.

The administration also stalled a professor who formally requested “reduction in force” data, continuing a years-long pattern of spurning faculty requests for information on how previous staff cuts were made.

The school claimed to the DePaulia that the data were being reviewed for “confidential personnel matters and/or competitive data … The report will also outline efforts to strengthen diversity and inclusion across campus.” After the paper asked for an explanation of the holdup, the administration told Prof. Terry Smith the report would be ready in “mid-June,” four months after he submitted the request.

Provost denBoer then apparently hit “reply all” by accident, informing Smith that his request was a “fishing expedition.” Oops.

Read the Sun-Times and DePaulia.