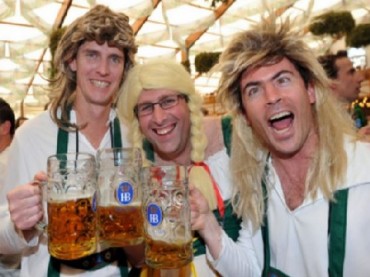 Steadfast Mexican national-holiday-legitimacy defenders did their best to try to stymie the partygoers before they could ignorantly and shamelessly appropriate Mexican culture for their own tequila-drinking needs.

One particularly brave cautionary poster was posted outside of Haines Hall on the UCLA campus on Monday: In the wake of these dark festivities, at which bumbling white people dared speak high school-level Spanish and wear certain types of hats, I would like to follow in this brave culture-defender’s footsteps and call attention to the plight of another oppressed group of people currently residing in America: German-Americans.

I am a cultural and ethnic mosaic: half German, a quarter Swedish, an eighth Swiss, and an eighth Norwegian. That makes me “Sub-Scandinavian Anglo-European Heterodox American/Questioning” (look it up, it’s one of the 51 ethnicities you can choose from on Facebook).

However, though I may practice certain Scandinavian cultural norms and I subscribe to the social constructs of the power structures of Switzerland, I identify predominantly as German-American.

You may be wondering what forms of oppression my people are subject to? Let me enlighten you—though you may have to think long and hard about where you have seen these types of oppression because they largely take the form of microaggressions and structural racial animus deeply ingrained in American society. You simply cannot understand this sort of oppression or even notice its existence unless you are a part of the oppressed people, therefore you’ll have to take my word for it that it exists, and that it hurts.

This whole Cinco de Drinko fiasco hit home for me because it reminded me of a particular German celebration that Americans blithely appropriate for their own drinking needs (beer in this case): Oktoberfest.

I have many friends that studied abroad in Europe over the past year, and their itineraries all contained one commonality: they all made sure to attend an Oktoberfest celebration in order to engage in massive beer consumption.

Here’s a picture of boorish Americans having fun at my culture’s expense: The perpetuation of negative stereotypes we see here is rather astounding. Do Americans think we all have long blonde hair and blue eyes? Are these three really so bold as to caricature my people as being chronic suspender wearers? I bet they’re all speaking their filthy high school German, too.

Above all, the worst aspect of this is that these Americans perpetuate the negative stereotype that Germans get hammered and go nuts—notice the guy on the right crossing his eyes in blatant microaggression?

I’d be willing to wager my American comrades know nothing about the history behind Oktoberfest—that it is a celebration of the nuptials of King Ludwig I. They’re simply having too much ignorant fun.

My culture is not yours to appropriate.

Wait, now that I think about it, I’m actually not even sure what “appropriating a culture” means… well, anyway, at least I know that my ability to live my life the way I wish is severely diminished when I see my friends getting bashed whilst donning German garb and blonde wigs. Or is it? Nevermind, lost my train of thought…

Though cultural appropriation is despicable, microaggression is even worse.

During my sophomore year, in the last session of my molecular biology course, my instructor was showing us a slideshow of careers we could have with a molecular biology degree when a slide of two older, white men doing science came up on the screen. The instructor proceeded to say: “We have too many old, white men in lab coats, I am hoping all of you will help change that as you become scientists.”

Wait, was that a microaggression or macroaggression against me? Let me check my critical race theory textbook real quick.

People sometimes tell me: you’re being too sensitive. So what if your friends are having fun with a German holiday? Have fun with them, laugh with them, and make fun of your own culture a little bit with them too! It’ll be fun—a little self-deprecation never hurt anybody!

They just don’t understand. My Germanness is what defines me more than anything else. Not the values I might share with my non-German American friends, nor the goals, nor the sense of humor I might share. I am German and they are not. I take pride in being German first, American second.

As for the molecular biology course incident, I’ll turn the humor off for a second.

That actually happened, and the quote relays what the instructor, whom I won’t name, said nearly verbatim.

How did I respond to this clearly racist professor’s stupid remarks? I laughed out loud, promptly decided she was an idiot, and simply decided not to take another class from her.