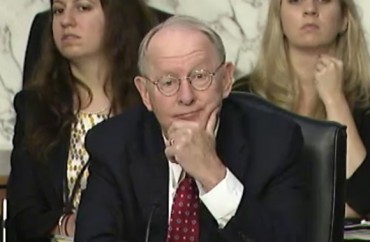 And a forceful Democratic defense of law enforcement involvement

Due process for accused students got short shrift at a Senate hearing Wednesday on campus sexual assault, though it made a late appearance.

The Health, Education, Labor and Pensions Committee considered the latest version of the Campus Accountability and Safety Act, a bill that would change how colleges deal with sexual assault allegations and which largely favors accusers.

Democratic and Republican sponsors of the bill, which has come under fire from civil-liberties advocates and lawyers, took no questions from the committee after testifying.

They got a response before the hearing even started, though: a dueling bill introduced by House Republicans that would give greater due-process protections to students accused of assault.

The committee is considering higher-education issues as part of the process of reauthorizing the Higher Education Act. Chairman Lamar Alexander, R-Tenn., said the committee’s next hearing Aug. 5 will focus on “student success.”

Though they consistently referred to accusers as “survivors” and “victims” and reiterated that sexual assault is severely underreported, bill sponsors at least paid lip service to the importance of fair hearings for accused students.

The Campus Accountability and Safety Act (CASA) has been overhauled in the 15 months since it was first introduced, Sen. Claire McCaskill, D-Mo., told the committee.

The eight original cosponsors met with more than 60 organizations, including those representing the interests of accused students, McCaskill said. (“Accused” does not appear in her prepared testimony.) They now have 21 Democratic and 12 Republican cosponsors, she noted. Both accusers and accused need a “level playing field” in the disciplinary process, McCaskill said. Sen. Dean Heller, R-Nev., emphasized the “campus climate survey” that would be required of all colleges under CASA. “There are many more survivor stories that haven’t been heard and haven’t been told,” he said.

The new version of CASA is “truly superior” to the original, and it “flips the incentives” so that schools treat sexual assault “as the violent felony that it is,” Sen. Kirsten Gillibrand, D-N.Y., told the committee. By delineating responsibilities between campuses and local law enforcement through memoranda of understanding (MOUs), “there’ll be no confusion” in who handles what, she said.

Sen. Kelly Ayotte, R-N.H., told the committee her state is a role model for the rest of the country. Dartmouth University just formalized a relationship with a local rape crisis center and the University of New Hampshire is providing a “conspiracy of care” to students alleging assault, she said. Accused students are also being told “what their rights are,” and the revised CASA would further give them a “fair and clear process” for any investigation.

Self-proclaimed survivor: It’s time for a much bigger federal response

The University of California’s newly revamped procedures are “really mirrored” in the CASA revision, President Janet Napolitano told the committee on a second panel. “I think we are very close to voluntary compliance with the key elements of CASA.”

The most important part of the bill is the “confidential adviser” or advocate for accusers, Napolitano said, adding that the position has been funded on every UC campus. But she asked the committee to keep in mind that some campuses may not need to sign MOUs with law enforcement because they already have “sworn” police forces, like UC. The “history of administrative underenforcement” against alleged rapists at Amherst College helped propel Dana Bolger, a 2014 grad, into co-founding Know Your IX, an advocacy group, she told the committee.

A self-described survivor, Bolger said victims including herself were “pressured to take time off” when reporting assault, which imposed “staggering financial burdens” such as lost tuition, health expenses and failing grades. Sen. Susan Collins, R-Maine, thanked Bolger for turning “your horrendous experience into advocacy,” a sentiment echoed by several lawmakers.

“This intolerable status quo demands a federal response,” Bolger said, asking for Congress to give the Department of Education’s Office for Civil Rights the authority to levy stiff fines against schools that don’t comply. That agency component “remains grossly underfunded and understaffed,” she said.

Congress can help colleges by simplifying the Department of Education’s “many rules and many exceptions to those rules” that colleges must follow under the Clery Act, which are “as complicated as the tax code,” Dolores Stafford, who served as George Washington University’s chief of police for nearly two decades, told the committee.

This plea neatly reflected the goal of Chairman Alexander, whose opening statement emphasized that “more laws and regulations” will not make anyone safer if they “take away from the time colleges and universities can spend on educating and on helping students stay safe.”

Mollie Benz Flounlacker, associate vice president for federal relations at the Association of American Universities, said she’s talked to member presidents about this issue more than any other in the past 18 months.

But she emphasized what an “incredibly messy” task it is for colleges to handle allegations because of conflicting state and federal laws: Schools need “clear and consistent standards with flexibility when appropriate.” AAU is releasing the results of its members’ nationwide campus climate survey this fall, she said, not mentioning that many members refused to administer the survey because they weren’t allowed to modify it.

While AAU supports the “goal” of CASA, it doesn’t want the confidential adviser to have any investigative or reporting role and it sees “potential conflict” with Title IX reporting requirements, Flounlacker said. Collins, who chaired most of the hearing in Alexander’s absence, agreed that “we’re putting schools between a rock and a hard place” on the adviser’s role in CASA.

Napolitano said the advisers would serve as “gatekeepers, not reporters” who must inform the administration of assault allegations. “Survivors need to know what to expect to receive out of a reporting process” as well under CASA, Bolger said.

The affirmative-consent standard for sex that UC has implemented, which shifts the burden “so the survivor isn’t always the one to explain” a disputed sexual encounter, “reflects students values already,” Napolitano said. But Stafford was less confident: “I have huge concerns about the level of understanding” among young men on the notion of consent.

UC is ‘looking’ at improving due process for accused

Due process concerns were first raised substantively by Sen. Bill Cassidy, R-La. “I actually know a woman who’s being accused” and “she feels as if she’s not been accorded rights,” he told witnesses. “In our democracy you’re innocent until proven guilty.”

“We’re actually looking into that right now,” Napolitano said of the UC system, implying it wasn’t part of the new framework the school approved last year. The school is weighing “what kind of support do we provide to a respondent in addition to a complainant” and whether it should be the “exact same thing.”

Napolitano said of the litigation filed against UC on the issue, about half each came from accusers and accused. But she warned Cassidy that it wasn’t a good idea to require accusers to seek justice in a real court, because it will be a “deterrent” to them reporting their allegations.

Bolger hammered home that point in a dialogue with Sen. Michael Bennet, D-Colo., saying that accusers have told her “again and again” that they won’t report their allegations if they’re required to go to police. She told Sen. Bob Casey, D-Pa., that accusers often don’t report because they probably know the accused student, they come from “already overcriminalized communities” or their states “don’t even recognize what happened to them as violence.” When Alexander again raised the issue of due process for “both the accused and the accuser,” after a long pause, Napolitano said UC is looking at how to handle issues like “confrontation rights” that are present in criminal law. Bolger didn’t see any problem with the current system, because Title IX already requires schools to be “fair and equitable” with students. “At the end of the day we’re all really on the same page here,” she said.

How to raise participation rates in campus climate surveys was disputed. Bolger said that social organizations like fraternities and teams should press their members to participate. Flounlacker said the surveys should be “locally administered” – unlike in CASA’s provisions – so that individual schools can control who promotes the surveys and what incentives they come with. Napolitano said schools should supplement the “snapshot” of the surveys with focus groups.

Stop badmouthing police and help them

Even as witnesses defended the propriety of the campus system for investigating rape apart from the criminal justice system, a former state attorney general challenged their assumptions.

Evidence in rape cases is “unnecessarily lost” because law enforcement isn’t brought in soon enough, Sen. Sheldon Whitehouse, D-R.I., told witnesses as the hearing was concluding. University investigations can even be “prejudicial to the victim in a later criminal justice process,” he said. Just because law enforcement has done a “lousy job” with rape investigations in the past doesn’t mean they should be kept out now, Whitehouse said, pointing to the progress that police have made with investigating domestic violence over the years. He disputed the idea that cops can hurt the process: “You don’t have much of a case if you don’t have a cooperating victim” in the first place.

“The concept that I am mulling,” Whitehouse said, wrapping up his spiel, is that the police would get involved at a “very early stage of the alleged assault.” There could be a “law enforcement vestibule” where an officer meets with a confidential adviser, accuser and Clery officer and walks them through the “real prospects” of their case, as well as the risks of losing “both electronic and biological evidence” if accusers don’t cooperate.

The “fears that have been justly provoked by clumsy, untrained, not-trauma-informed, inexperienced law enforcement interventions are becoming an obstacle” to helping accusers early in the process, Whitehouse said. He asked witnesses to submit their responses to his idea in the hearing record.