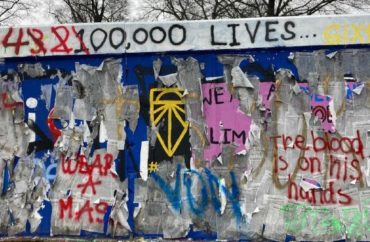 University specifically tells students they can graffiti anything

The Chronicle first reported on the incident on October 19, but did not provide any photos of the graffiti in its article and did not quote exactly what it said. The campus paper described the graffiti as “homophobic” and “anti-Black.”

But the private North Carolina university specifically tells students they are allowed to write anything they want on the bridge.

“Individuals and student groups may express opinions within this area that are not restricted by content, except by legal standards,” the university’s free expression policy says.

That has not stopped an investigation from moving forward. University officials said in an email, according to the Chronicle, that perpetrators could be punished under the school’s “hate and bias policy.”

The paper reported that an email from student conduct director Jeanna McCullers and Clay Adams, vice dean of students, promised to invoke the policy if the perpetrator is a member of Duke.

“We expressly condemn this language and this type of behavior, which devalue and undermine the rich diversity of individuals within and outside of our community,” the email said. “These actions are cowardly and done to disparage our LGBTQIA and people of color communities. This will not be tolerated on Duke’s campus.”

The Fix reached out to McCullers and Adams via email on October 27 and November 1 and asked for a copy of the letter sent to students and an update on the investigation.

Duke University’s media team has not returned a voicemail and three emailed requests for comment.

The College Fix did not receive a response from Duke spokespersons Erin Kramer and Steve Hartsoe. The Fix emailed on October 27 and November 1 and asked for an update on the vandalism and what steps the university has taken to investigate the incident.

The Fix emailed again on November 3 and asked for photos and information on what the graffiti said.

The College Fix left a message with a communications office staff member on the morning of November 3 and asked for a response to the same questions. The staff member said Hartsoe would be in the office but he did not respond by the end of the day.

Duke officials have not asked the local police department for help with the investigation.

Packard then deferred comment to the campus police department.

The Fix reached out to Duke’s Investigations Commander Greg Stotsenburg twice via email on October 27 and November 1 for information on what the campus police is doing to investigate the matter but has not received a response.

The university faced a similar vandalism three years ago. Someone painted a swastika on the same East Campus bridge.

According to the Chronicle, the university’s president placed security cameras on the East Campus Bridge in 2018. When a similar incident occurred in 2020, Duke reviewed the cameras in an attempt to find the perpetrator.

The campus paper’s archives do not contain articles about if the police ever identified a suspect.