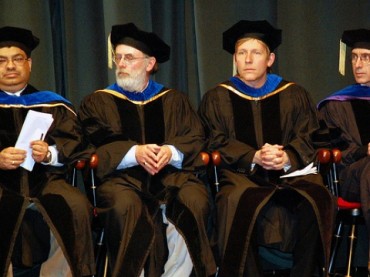 Robert Elliott has compiled quite the hit-list in an Examiner piece that offers us a blow-by-blow account of the latest escapades of the Gang of 88 – complete with email contact information for each scholar. The list reads like a socialist manifesto. It’s sort of an eye-opening experience if you read the whole list and see some of the tripe these professors peddle:

The Gang of 88 was a group of 88 professors at Duke University who signed an inflammatory advertisement that appeared in the Duke Chronicle (the university’s student newspaper) shortly after black stripper Crystal Gail Mangum falsely claimed she was raped by white members of the Duke lacrosse team.

Here’s an update on the infamous 88, roughly eight years since the publication of their ad:

Aravamudan, Srinivas (English) – Professor and Dean of the Humanities at Duke. Contributed to the book “Jameson on Jameson: Conversations on Cultural Marxism” in which he asks Mr. Jameson the following question:

Your interest in allegory, fourfold medieval hermeneutics, and also the evocation of Dante’s selva oscura at the Bonaventure Hotel has sparked a recent discussion in PMLA about your religious unconscious. Is there something to this?

This maniac can be contacted at [email protected]

Click below to read the whole list, if you think you can stomach it. It’s long and unsettling – but it’s important to keep tabs on them.