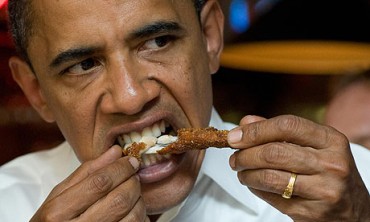 In addition, Yourofsky compared eating meat to cheese or eggs, or drinking milk to bestiality, according to a report by Michigan Capital Confidential.

“You engage in carnivorous bestiality on a daily basis,” Yourofsky told the students. “Sometimes multiple times a day. You eat things that come out of a hen’s ass and shove things into a turkey’s ass. … You eat breast, legs and thighs and then you pay somebody else to sexually molest a cow and squeeze their nipples for you so you can steal their milk.

“There is a Holocaust taking place right now,” Yourofsky also told the class. “It is the world’s largest and longest running Holocaust.”

Yourofsky’s talk prompted students to complain to administrators at EMU about his remarks. In addition to his remarks about meat-eating, Yourofsky made other provocative statements.

Yourofsky has given 2,300 lectures across the United States at 178 schools, according to the report. But Yourofsky is not alone in voicing extreme animal rights views on campus. As The College Fix reported earlier today, students at the University of California, Santa Barbara recently heard a lecture by a woman named Patricia MacCormack, who told students that we ought to think of animals as equal to humans. She described her talk as “an absolute critique and repudiation of speciesist discourse.”

Did you catch that? Apparently, there’s a word for people who don’t believe animals are equal to humans: “speciesist” — you know, like “racist” or “sexist”? You are a “speciesist” if you believe human life is more valuable than animal life.

Here’s a question for you: If radical animal activists truly believe that animals are equal to humans, then why do they stop at simply trying to prevent humans from killing and eating animals? Shouldn’t they also try to stop animals from killing each other?

A life is a life, after all, and why should it be any less outrageous for a human to take the life of a fish than it is for a bear or a bird to do the same? If animals truly are equal to humans, then it is the duty of radical animal rights activists to prevent animal-on-animal homicide. I don’t see how logic allows any alternative.

Maybe if cobras, hammerhead sharks, bengal tigers and black widow spiders can simply be educated about their “speciesist” sins of eating other animals, then they, along with all of the college students these radicals are lecturing, can be shamed into adopting a vegan lifestyle.

Since the world has now reached such an advanced stage of progressive enlightenment, it is high time for the bloodthirsty animals of the world to evolve.

And if carnivorous animals won’t reform voluntarily, perhaps these animal rights activists would be willing to offer themselves up as an alternative source of food. A worthy sacrifice in view of an ethical crisis that is supposedly “worse than the Holocaust,” wouldn’t you say?