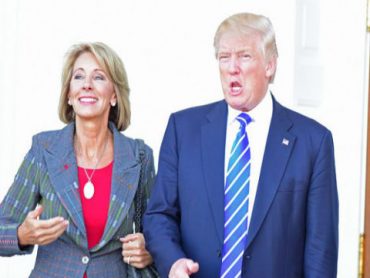 For 16 years, public teachers across the land have bemoaned Race To The Top and its predecessor, No Child Left Behind. Both were federal mandates put in place by Barack Obama and George Bush, respectively, designed to improve public education.

Enter Betsy DeVos, an outsider (disclosure). Someone who believes in less federal red tape and oversight and more autonomy for teachers — and educators are actually griping about that?!

As someone who taught in a public school for decades, I’ve seen quite a bit of unintentional amusement this past week as many educators and others have jumped on the anti-Betsy DeVos bandwagon.

As The College Fix’s Jenn Kabbany detailed on Wednesday, the Trump nominee to head the Department of Education was lambasted as “knowing and caring nothing about public education” (Robert Reich), having a mission “to destroy our public schools” (Michael Moore), being “either underprepared or a zealot” (Slate), and “could make life hell for LGBT youth” (The Daily Beast).

Earlier in the week I chimed in with: “It’s hilarious all the whining about the Trump secretary of education nominee … especially considering what the hell teachers were dealt the last 8 years with RTTT, Component V and the like.”

Race to the Top (RTTT) is often dubbed “No Child Left Behind on steroids.”

No Child Left Behind (NCLB) was the George W. Bush education initiative which, ironically for a supposedly “conservative” president, dramatically increased the federal government’s role in the education realm. Teachers had huge beefs with No Child Left Behind, mainly because it forced educators to “teach to the test” and set arbitrary benchmarks with make-or-break pass/fail rates.

Race to the Top, in a nutshell, doled out over $4 billion in competitive grants as part of the 2009 Obama administration American Recovery and Reinvestment Act.  When Race to the Top came along, the same folks weren’t happy, but hey, they said — it can’t be that bad since President Obama is a Democrat, right? He’s on our side!

Wrong. It was that bad.

Probably the biggest gripe was a new teacher evaluation system, dubbed “Component V (5),” which utilized student test results as part of the measure. Some RTTT funds went towards devising “pre-tests” and “post-tests” for just about every subject area taught — the pre-test given at the beginning of the school year, and the post-test at the end — with the goal being to get a measure of student progress.

Now this sounds good on paper, but when you delve into the specifics it gets more complicated … and even ridiculous.

Take my subject area, foreign language. I taught level one. Now, how much do you think students know about the subject coming in? That’s right — hardly anything. Now, after a full school year of instruction, do you think they will learn something? Even the most apathetic among them will, yes. So there I was wasting class time giving students yet more tests (students have to take these pre- and post-tests for all their subjects … in addition to the exams already required by the state and feds) on which it virtually guaranteed they will show growth.

Did I mention that I had to grade the larger portion of those exams?

Now consider this: There are no standard foreign language texts for the entire state. My district used the same texts, yes, but our texts were different from those of other districts. Yet, RTTT funds went to the creation of common pre- and post-tests for all levels of foreign languages taught in the state … even though the state’s varied texts use different vocabulary terms.

But this concern was small potatoes. Teachers in other subject areas had to deal with poorly worded test questions and worse, answer errors.

MORE: The Left loses its mind over Betsy DeVos

Again, these pre- and post-test results (student improvement) are only part of a teacher’s evaluation; typically, if a teacher scores negatively in this area, other areas could, well, “salvage” his/her overall rating. In cases of a deadlock between the evaluation areas, the school principal could have the final say. But this situation led to complaints from the public that RTTT money was being wasted because the new evaluation system resulted in few teachers being rated “below proficient.”

The amount of paperwork, actual and virtual, for teachers and school-based administrators increased exponentially once Race To The Top was in place. If educators were already overworked, the thing called “sleep” now became a rare commodity indeed. Complaints heard in the teacher lounge were unceasing.

So — do these teachers really think Betsy DeVos will exacerbate this situation?

Another common social media complaint about the nominee is that she was (or appeared) unfamiliar with various educational terminology during her hearing.

Teachers routinely gripe about being “edu-jargoned” to death as new terms (most especially acronyms) are added nearly daily. “We have to remember all these?” they (rightly) cry. For Heaven’s sake, many school/district administrators don’t know all the terms, and even if they do it’s largely meaningless. This should be the least of DeVos’s critics’ concerns.

Considering that between approximately 40 percent to 60 percent of teachers unions are comprised of right-leaning members, many should laud a reduced federal role in education … indeed, a conservative position for years has been that the federal DOE should be abolished. (It was created only in 1980, after all, by President Carter as essentially a “thank you” to the teachers unions.)

Teachers — conservatives and liberals — should consider what such a reduction (or elimination) would mean for them personally: Drastically increased autonomy. Not being beholden to innumerable mandates. Reduced testing. Far less “scripted” teaching methods. Increased creativity.

During my high school years, when the federal education role was a fraction of what it is today, the teachers in my HS social studies department had designed and implemented their own award-winning curriculum: An international relations course. Metropolitan studies. Comparative religion. Political science. Economics. But by the early 1990s they had to scrap it as higher ups decided that schools’ curricula had to be uniform and “standardized.”

If you were a teacher, which would you prefer — mandated slavish devotion to a course and methods designed for you by some outside “expert,” or the latitude to design such to best suit you and, more importantly, your students?

Betsy DeVos — hopefully — will be someone who looks “outside the box” for the solutions which seemingly have eluded educationists for decades.

Editor’s Note: This post has been amended to include a disclosure.