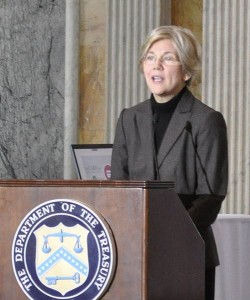 Elizabeth Warren is possibly the only Democrat in the country who could lose in Massachusetts. She is running neck-and-neck with Republican Scott Brown in a state where registered Democrats outnumber Republicans 3 to 1 — and still she’s poised to lose the most un-losable Senate race in the country. Why is that? Truth be told, she’s given conscientious Democrats every reason not to vote for her.

Let’s examine the ways Warren has betrayed the liberal principles she claims to represent.

In the months since knowledge of Warren’s deceptions became public, the blonde-haired, blue-eyed Warren has been able to offer no evidence of Native American lineage. She famously defended herself by saying that her grandfather had high cheekbones, “like all Indians do.” She was eventually caught having plagiarized recipes for a Native American cookbook. Even her thin claims to 1/32nd part Indian heritage proved baseless.

A 1997 article in the Fordham Law Review described Warren as Harvard Law School’s “first woman of color.” What she really is, it appears, is a white woman of European heritage who knew that universities like Harvard are under tremendous pressure to diversify their faculty. Nothing wrong with being white, except when you lie about it in order to get an edge over genuine racial minorities in the job market.

Mainstream Democrats today maintain that race-based affirmative action is an important means of rectifying past prejudice and discrimination. How then can a principled Democrat support a white woman who falsely claimed minority status on the way to a high-flying and lucrative career — all at the expense of ethnic minorities who might have been hired instead? If Warren were elected to the Senate, wouldn’t her presence there make a mockery of the Democratic Party? Wouldn’t it make a mockery of the entire Civil Rights movement?

Warren has styled herself as an advocate for the working class and the poor. Nevertheless, by lying about her race, she made herself very rich. She enjoys a $350,000 annual salary from Harvard, even though she only taught one class last year. She reportedly earned as much as $200,000 in royalties and consulting fees while taking a leave from her academic job to help found the federal Consumer Financial Protection Bureau. Nothing wrong with being an advocate for the poor and disadvantaged, except when your entire career is built on gaming the affirmative action system that was designed specifically to help the disadvantaged. That’s hypocrisy, plain and simple.

Just this week, Warren has come under fire for allegedly practicing law in the state of Massachusetts without a law license.  William A. Jacobson of the blog Legal Insurrection has published detailed evidence that Warren may have broken the law by representing numerous clients without license to do so. In one instance, Warren was paid $212,000 to represent the Traveler’s Insurance Company in a case before the Supreme Court.

In this and other federal cases she is listed in court documents as “of counsel” under a Massachusetts address. It is illegal to practice law under a Massachusetts address without a license. But why should it come as a surprise that someone who sought for years to advance her career by misrepresenting her racial heritage would take lucrative corporate law cases without any license to do so?

When you look at the facts, Elizabeth Warren made herself rich and powerful by seizing upon the goodwill many liberals have for minorities and deceitfully exploiting it for her own gain. Considering all Elizabeth Warren has done to advance her career at the expense of the disadvantaged, no conscientious Democrat can knowingly reward her with election to the Senate in November. To do so would make a mockery of all that the Democratic Party claims to stand for.

(Cross-posted from The International Business Times)