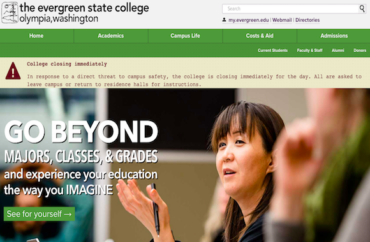 Evergreen State College, the site of numerous recent racially charged and aggressive student protests, has been closed down and evacuated due to a “direct threat” to the campus.

“In response to a direct threat to campus safety,” proclaimed a banner on the school’s website Thursday morning Pacific time, “the college is closing immediately for the day. All are asked to leave campus or return to residence halls for instruction.”

Prior to the evacuation order, a representative of Evergreen State confirmed to The College Fix over the phone that the college was indeed closing for the day due to a threat. “I am unable to tell you any more than that,” the representative told The Fix.

Evergreen State recently made headlines after a mob of furious students harassed a white professor for refusing to leave on an anti-white “day of absence.” The professor was subsequently forced to flee campus after police told him he was not safe there.