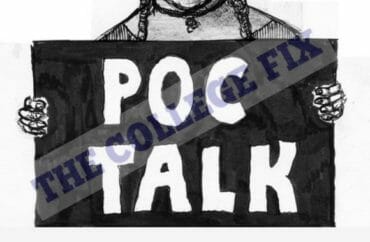 “This should be a place where we can be us without it being overshadowed by the dark cloud that is living under white supremacy and having to see things from a white perspective. This is why when we do cover these issues it will be in the context and from the perspective of POC and POC only,” according to the section’s editors as they reintroduced it to readers in September.

The anonymous column, known as “POC Talk,” debuted in the bi-weekly Cooper Point Journal last year and returned this fall to the newspaper’s pages following racial unrest that erupted at the public university this past spring.

“Dear White people, please take a step back, this isn’t brown-people-answer-white-people’s-questions-hour, we’re asking specifically for submissions from POC,” the section’s editors added in their September intro. “As being told no seems to be a difficult concept for some of y’all I await your emails about the Irish, how the term white fragility is mean (great example of white fragility) and how we need to view people through a color-blind lens (just lol). You will 100% not get a response!!!”

Published in the Journal’s Letters & Opinion section, POC Talk says it provides “no-holds-barred commentary on local happenings.” In the inaugural POC Talk column, it was suggested that a subject touched on in the column could possibly include “how do I rid myself of white-dread [sic] roommate’s numerous micro-agressions.”

Topics the column has discussed include student activism, self care, the local comedy scene as well as the turmoil that upended the college after students in May accused a white biology professor, Bret Weinstein, and the university of perpetuating racism.

The Cooper Point Journal did not respond to multiple requests for comment regarding the column.

In one column, POC Talk points to the “scary national backlash the school faced last year”, referring to the events that rocked Evergreen after students accused Weinstein of racism because he criticized a planned “Day of Absence” in which white people were asked to stay off campus.

The protests on campus garnered national attention and amid the upheaval the college was shut for multiple days in early June because of threats it received. Since the unrest, Evergreen has said it will train students not to discriminate against white people.

Weinstein and his wife, fellow biology professor Heather Heying, sued the college and eventually a reached a $500,000 settlement, a topic POC Talk discussed earlier this semester.

A column complained about the settlement, arguing Weinstein is a poster child of white privilege and that minorities “face harassment on an almost daily basis, it’s horrible and it’s traumatizing but ain’t nobody going to pay us $500,000 to deal with it.”

Brett [sic] is the definition of white privilege and fragility—the fear and “danger” he and his wife felt they were exposed to was only the slightest sliver of what POC deal with on an almost daily basis. The fear they were experiencing is not unique or even new to those of us who face backlash by fact of our mere existence. None of this is to deny the legitimacy of their fear, but instead to point out the privilege there is in being able to make the decision to place yourself in a space of vulnerability by publicly expressing opinions and ideas. This authority over the way people will treat you is what makes Brett [sic] and Heather the textbook definition of white fragility and privilege.

Recent columns for POC Talk include a series called a “Crash Course in Social Justice Slang,” which has defined terms such as institutional racism, “woke” and intersectionality.

MORE: Evergreen College pledges to train students not to discriminate against white people