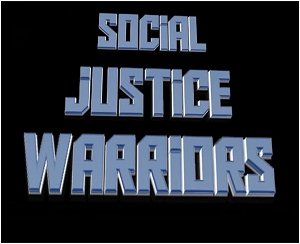 The College Fix and sites like it are chock full of anecdotes about how radical progressivism is actually the very antithesis of what it purports to be: tolerant, understanding and pro-diversity.

Today’s “snowflake” college students need “safe spaces” in which to take refuge from things like “microaggressions,” and while screaming about how delightfully “tolerant” they are, the slightest bit of intellectual, academic, and even comedic discomfort will suddenly send them into a paroxysm of self-righteous indignation and hurt.

This trend has infected even the geekiest of the cultural landscape.

For more than 50 years, the Hugo Awards have been handed out at the annual World Science Fiction Convention (Worldcon) to honor the best science fiction and fantasy writing of the previous year. But when the nominees for this year’s Hugos were announced, it touched off a firestorm unlike any in the awards’ history.

That’s because so many of this year’s nominees are perceived (not always correctly) to be conservative or libertarian. A group of right-leaning science fiction authors organized a campaign to stuff this year’s Hugo Awards ballot with writers they felt had been overlooked.

There are other science fiction awards, but the Hugos hold a special place among fans. Anyone who pays the $40 to attend Worldcon can nominate an author. The awards thus have a special legitimacy because they are seen as being selected by the most dedicated readers.

The fact that Hugos are voted on by readers means that authors and publishers have engaged in various levels of politicking over the years to try to win. Big-name writers are not above posting lists of their favorite works on their websites or popular science fiction message boards in an attempt to whip votes.

However, among certain elements of the science fiction community, there had long been a suspicion that campaigns to gather Hugo votes were more coordinated and less reflective of the fan base than they might appear.

The schism over the Hugo Awards is aesthetic as well as political. For some time now, a handful of stars in the science fiction firmament—notably popular author John Scalzi and some polarizing editors associated with Tor, arguably the most influential publisher—have been pushing to elevate the genre by embracing certain literary and political themes. Critics contend that in practice this means an overabundance of “message fiction” where, say, encounters with an alien civilization become leaden metaphors for gay rights and other politically correct themes. The fans opposed to this want science fiction to stay focused on story-telling and adventure—and they are annoyed by the attempt to banish cherished genre conventions, such as book covers with buxom babes and musclebound heroes.

The progressive faction has been much more successful of late; last year the Hugos “were swept by a younger group of women and people of color” despite their work, according to sales figures, not being read widely by the general public.

Torgersen has assumed command of the “Sad Puppies” campaign in which conservative-leaning sci-fi writers and fans began openly clamoring for their own slate of Hugo nominees. This year the effort was quite successful; however, with such success inevitably comes the progressive backlash — the usual litany of “-isms” thrown about, in particular racism and sexism.

Torgersen, who’s married to a black woman, wasn’t even immune; a Salon and Daily Beast columnist accused his wife and (biracial) child of being a “shield” for his “latent racism.”

What SJWs wanted the first issue of  The Avengers to look like.

In addition, Entertainment Weekly used the headline “Hugo Award nominations fall victim to misogynistic, racist voting campaign.” Amazingly (and thankfully), it did offer up an eventual correction to the story noting that the Sad Puppies nominees “include[d] many women and writers of color.”

The field of comic books hasn’t been immune to this sort of nonsense, either.

The industry weakened and eventually threw out the CCA, and editors began to resist hiring conservative artists. One of us, Chuck, expressed the opinion that a frank story line about AIDS was not right for comics marketed to children. His editors rejected the idea and asked him to apologize to colleagues for even expressing it. Soon enough, Chuck got less work.

The superheroes also changed. Batman became dark and ambiguous, a kind of brooding monster. Superman became less patriotic, culminating in his decision to renounce his citizenship so he wouldn’t be seen as an extension of U.S. foreign policy. A new code, less explicit but far stronger, replaced the old: a code of political correctness and moral ambiguity. If you disagreed with mostly left-leaning editors, you stayed silent.

Many of the contemporary cadre of comic book creators are brazenly open about their politics on social media, one even going so far as to tell people who disagree with him not to buy his products. This amazing … “business model” is quite head-scratching; one would think companies that rely on people to purchase their goods might have a better sense of customer service.

That is one of the more extreme examples of the open tweeting/Facebooking/Instagramming etc. by creators of the progressive politics du jour, where outright disdain and incivility directed at right-leaning fans is quite commonplace.

Marvel god-man Stan Lee would be aghast at all this if knew about it. (Maybe he is and does; however, he’s no longer in a position to do anything about it.) Fans who disagreed with anything the company did back in his day (on the old comic book letters pages) were dealt with respectfully and with the goal of maintaining fans as (paying) readers.

To be sure, one can be a progressive and a good creator whose work is purchased by conservatives. Many of comicdom’s great creators of lore were liberals, and their work remains held in high esteem by folks across the political spectrum. Big-time liberal Steve Englehart, for example, scripted some of Marvel’s greatest stories, including the Captain America “Secret Empire” tale where it is highly implied that the head of the villainous organization was none other than Richard Nixon.

A big difference today is today is that, unlike Englehart’s “Empire” yarn, writers don’t much bother with analogies or comparisons — they just use conservative politicians as the explicit, de facto bad guys with little or no discussion of the issues.

I’ve often wondered if the reason current creators act as they do is because their (print) medium is dying. Monthly sales numbers are but a fraction of what they were decades ago; dollar figures keep apace by recycling a lot of what has come before (like from Englehart’s era) via trade paperbacks and collections.

Perhaps comics haven’t seen a push-back like that of science fiction’s Sad Puppies due to this eventual demise. (Comic book movies are the real money makers now).

As the Standard’s Mark Hemingway concludes, “… the fact that the genre had previously welcomed extremes is partly what made it so wild, imaginative, and beloved. Sacrificing ideological diversity for more superficial measures of diversity isn’t a recipe for producing great writing.”

Demanding that science fiction stories contain quotas for “historically disenfranchised populations” (or something), and demanding apologies for making completely innocent queries is as stupidly “progressive” as college types mandating race/gender/diversity/tolerance workshops where “conversations” are advertised, but (liberal) lectures are the reality.

Put your actions where your words are, progressives. Embrace all diversity, which, believe it or not, means diversity of viewpoint. If you don’t, everything you touch will decay … like a cotton candy-coated, never-brushed tooth.