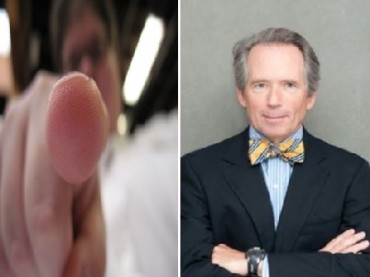 If one would have asked statistician Caleb Rossiter a decade ago about global warming, he says he would have given the same answer that President Barack Obama offered at a recent commencement address.

“He castigated people who don’t believe in climate catastrophe as some sort of major fools,” Rossiter says of the president’s speech, adding he would have agreed with the president – back then.

But Rossiter would give a different answer today.

“I am simply someone who became convinced that the claims of certainty about the cause of the warming and the effect of the warming were tremendously and irresponsibly overblown,” he said in an exclusive interview Tuesday with The College Fix. “I am not someone who says there wasn’t warming and it doesn’t have an effect, I just cannot figure out why so many people believe that it is a catastrophic threat to our society and to Africa.”

For this belief – based in a decade’s worth of statistical research and analysis on climate change data – Rossiter was recently terminated as an associate fellow at the Institute for Policy Studies, a progressive Washington D.C. think tank.

Rossiter wrote an op-ed for The Wall Street Journal titled “Sacrificing Africa for Climate Change,” in which he called notions of climate catastrophe “unproved science,” and shortly thereafter received word from the institute that his position was terminated.

“Unfortunately, we now feel that your views on key issues, including climate science, climate justice, and many aspects of US policy to Africa, diverge so significantly from ours,” their note to Rossiter stated.

Rossiter will continue to offer courses on math, history, politics and statistical analysis at American University, he just landed a deal to write a book on his experiences teaching inside high poverty high schools in D.C., and he recently returned from the Sudan, where he spent time as a Fulbright fellow.

And he will continue to teach college students that the data behind “catastrophic climate change” does not stand up to scrutiny – after all, it’s how he came to hold such opinions himself.

About a decade ago, Rossiter assigned his international statistics students a paper that asked them to analyze some topic of international affairs using statistics. When one female student turned in a paper on humans’ role in global warming, he gave her an F.

“She came to see me and said, ‘But Doc, it’s not fair, I am just repeating exactly what they said,” he recalled. “And I said, ‘That’s impossible, because the evidence you cited here is just wishful thinking, there is no real data.’”

“So I sat down with her and we looked over the article, which is one of the classic ones in climate change in which they developed a computer model that tries to say how much of the half a degree rise in temperature can you attribute to natural variation or the Arctic oscillation, or whatever the hell is going on up in the north there when the seas gets warmer and colder over long periods, things sort of like El Niño- or is it human [caused]?”

“I had to raise her grade because she certainly had cited the evidence they had given, but I just couldn’t give her much of a grade because she should have been able to see – as most people should be able to see – that the computer models were just guessing and sort of notional, and just kind of playing around to get a good fit, but didn’t have much scientific basis.”

“So I became quite interested in this phenomenon,” he added. “So many of my colleagues and so much of educated America and liberal newspapers and all just believe that mathematicians have set up models that should make us very certain that the recent half-degree uptick from 1980 to 2000 was human caused – when in fact they were just playing with the models. I use models a lot, and these were pretty weak.”

From then on, Rossiter specifically assigned students papers to look at global warming and climate change issues, and over the years graded hundreds of papers on the topic. The results from this further solidified his belief that the global warming crisis is one that’s man-made.

“So there is really two big statistical questions: what caused the little warming, and what effect did the warming have on these other climate variables?” he said. “I am a pretty decent statistician, I have taught for many, many years. The data that support the headlines are very, very weak, very, very notional, and simply not logical.”

“You couldn’t have this many terrible effects from a half a degree rise in global temperature. It’s probable that there are some, but it gets a little boring because it’s always weak data, because that is the nature of a tremendously complex system.”

Over the years, he’s broken a few students’ hearts when they learn of this truth.

“I have had students who are very strongly pro-the global warming movement in my classes, of course, because most young people have heard this already,” he said. “And when I have them actually do the study, and take apart an IPCC [International Panel on Climate Change] claim, sometimes they break into tears, and they say ‘I can’t believe this is the only class I’ve ever been in in which anyone has ever told me there is even an issue.’”

“I always enjoy that but, I would enjoy it the other way, too,” he said. “I always really push them to evaluate, dig down and learn the arguments of the other side- that is part of education.”

Yet it is Rossiter’s former colleagues at IPS and similar think tanks who refuse to debate him.

“I found at the Institute for Policy Studies no willingness to sit down and talk through the areas in which our analyses diverged,” he said. “For years, I would ask their climate staff, who were not particularly scientific or statistical, they are social activists, to come to my classes and debate me, to talk it out with me in front of the IPS board.”

There is a reason they won’t, he adds.

“I think they believe … that you give legitimacy to the ‘denialists’ if you debate them,” Rossiter adds. “I think that’s a terrible idea. … At IPS, like many other places, people don’t want to debate it because they have this funny statement that, and Mr. Obama repeats it every time he opens his mouth, ‘the debate is over.’ I have never heard a more remarkable statement in my life about anything.”