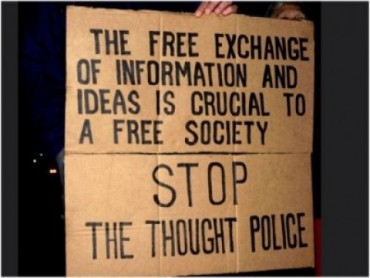 The full story wasn’t widely reported; stories focused instead on the Obama portion of the costume, and the fact that the Trump character was pulling the Obama/Hillary person around via a noose.

UW Chancellor Rebecca Blank, predictably, put out a statement that the fans’ “hateful message” was “contrary to our deeply held values.” The one spectator was permitted to remain in the stadium after he removed the noose as Blank recognized that political speech is, well, somewhat protected:

“As offensive as this costume was, I believe our university must resist the desire to outlaw forms of speech and political dissent with which we disagree.”

But this wasn’t the end of it.

This week the university said it will begin a review of its stadium policies in response to the “noose” incident:

Officials said they will seek to ensure “that symbols of this type are not displayed in our stadium.”

Halloween costumes may be worn at Camp Randall and the Kohl Center, but they “must be of an appropriate nature,” according to UW Athletics’ carry-in policy.

“A noose is a symbol of one of the vilest forms of racial hatred and intimidation in our country’s history,” Blank and Alvarez said in the statement.

Rev. Alex Gee, a former UW recruiter, expressed his deep disappointment in UW through an open letter. Gee cited multiple past incidents in which UW failed to properly condemn hate crimes because of freedom of speech that made people of color feel as if they were not “free.”

Make note of that last sentence. While certainly the university can condemn an action without forbidding it, Gee is alluding to the critical race theory-based idea that American free speech rights can be … detrimental to minorities.

Need it be mentioned that hangings in effigy — not to mention burnings in effigy — have a long history of being used as political expression? And such certainly didn’t exclusively target minorities. (But are we surprised not many know this?)

Added to this mixture is UW Madison student Eneale Pickett who last month made news with his selling of “All White People Are Racist” hoodies.

If you want "All White People Are Racist" hoodie order it now @ https://t.co/j2lKeG8kNE. yall better hurry they going fast!!! pic.twitter.com/0hgtFyKmDB

Pickett also offers apparel with the slogan “If I Encounter Another Cop With A God Complex I’m Going To Have To Show The World That They Are Human.”

The reaction from campus officials here? “In this case, the individuals involved are exercising their rights to free speech and engaging in a private activity unrelated to their status as students.”

Agreed!  Yet … this same affirmation was not afforded to an individual who engaged in a centuries-long tradition of outright political expression.

And to further demonstrate how eye-rolling are UW’s concerns about “hateful messages” affecting its “deeply held values,” Pickett was one of the featured attendees at the annual UW Madison Diversity Forum:

With recent incidents of hate and bias making news locally and nationally, the annual UW-Madison Diversity Forum provided an opportunity for administrators and the campus community to discuss inclusivity on campus. …

“I think native students get constantly pushed to the side,” Ashley Duffy, a UW-Madison law student, said. “We just get pushed to the side and people tell us ‘well, it’s not a big deal’ and it is a big deal. I want UW, which strives for diversity, to actually step up and do something for it.”

Duffy’s sentiments were echoed by UW-Madison sophomore Eneale Pickett, creator of the Insert Apparel clothing line, which features sweatshirts with the phrase “All White People Are Racist” among others.

One wonders if Pickett managed to keep a straight face when he said that.

Nevertheless, Pickett, like Rev. Gee among others, desires limits on speech based on racial classification and circumstance. This is the very essence of critical race theory (CRT) — “[f]ocusing on rationality, debate and traditional Western concepts like free speech can tie us to established ideologies and numb us to the pain of those around us. It can easily be a way, consciously or subconsciously, of imposing the will of the powerful upon the oppressed.”

Such “attachments” to concepts like free expression are “attempt[s] by white people to ignore the work and will of Black people,” and “an attempt to keep structural power in white hands.

“Essentially, it is just a rebranding of racism.”

Or, look at it this way: CRT is a form of revenge. It seeks not to grant equal rights among all people, but to deprive some of their rights, allegedly to redress past wrongs.

Less extravagantly put, it demands a “sliding scale” of rights … based primarily on skin hue. The question is, how many rights must be dismantled (or at least diminished) to “right” the scales? For how long?

If Pickett’s reaction to UW’s free expression hypocrisy is any indication, the answer doesn’t look good:

@CollegeFix are you big mad or little mad? ???

MORE: Fear the Future: College students’ views on free speech are rather worrisome