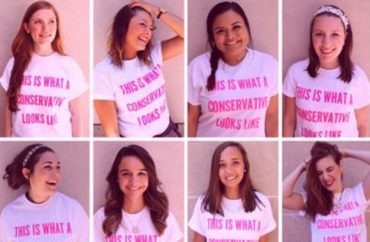 Conservative students often either sacrifice their convictions at the altar of respect from their liberal peers, or get shouted down by louder, leftist voices.

A new campaign seeks to embolden conservative students to stand their ground.

#ShesConservative, recently launched by the Network of enlightened Women, encourages conservative college women to boldly proclaim their principles by tweeting and sharing their stories.

“Semester after semester I hear from women who are frustrated that their campus feminist counterparts are quick to try to silence them,” Karin Agness, founder and president of NeW, said in an interview with The College Fix. “It is as if conservative women no longer count as women to modern feminists once they say that they are conservative.”

Agness said the campaign not only creates a supportive community for conservative college females, but it also gives them a platform to speak out and stand behind their beliefs.

Dozens of students have shared their stories on NeW’s website, taking photos with T-shirts proclaiming “This is what a conservative looks Like” and tweeting them out.

Their stories include examples of bias and intimidation they face: a professor who sung big government’s praises; being told they “hate all women” because they’re conservative; being graded down because of their beliefs.

A video put out in conjunction with the campaign highlights conservative females students who have been called “unintelligent,” “ignorant,” “uneducated” and “heartless,” among other names.

On Wednesdays, we wear pink. Remember to wear your #ShesConservative shirt tomorrow! pic.twitter.com/M8HXnTLUHN

Emma Harrison, a junior at UNC-Chapel Hill, said being a conservative on her campus is hard.

“I feel treated as an inferior to more liberal individuals on campus,” she told The College Fix in an interview. “I have worked hard for my education. I have worked hard to get here. And people think my views are backward or inferior.”

But Harrison is fighting back.

“Being a conservative has impacted my life by forcing me to speak out against my challengers and taking a stance for my beliefs,” she wrote as part of her “story” on NeW’s website. “I have grown both in confidence and knowledge through my conservative discovery.”

For Emily Hall, a junior at Harvard University, there are many other students “who dismiss conservatism too quickly, or simply ignore the possibility that a young, college educated woman might identify as conservative,” Hall told The Fix.

“We’re shouting to the world that conservatism is something to be proud of, and in doing so, we’re shattering stereotypes of young women and of conservatism itself,” Hall said.

Vanessa Rivera, a student at Florida Gulf Coast University, said that while she believes professors are open about their own political beliefs, they also “don’t mind grading you lower when they know your beliefs.”

Nevertheless, Rivera said she debates her conservative views often in class, and that many of her peers come up to her afterwards to thank her. The #ShesConservative campaign is just another powerful reminder for Rivera that she is not alone, she said.

Agness notes the campaign takes a page out of the playbook of the 1970s feminists by turning “consciousness raising” into a larger public movement to cause change and recruit new members, she wrote in Forbes, adding: “It is time for conservative young women to stop hiding their conservative views and shout their conservatism.”