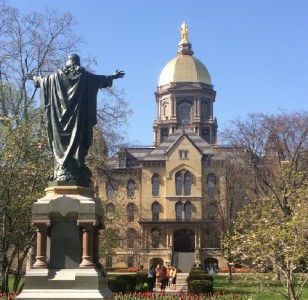 A federal appeals court has denied Notre Dame’s request for an exemption from the Obamacare mandate, which requires the Catholic university to provide contraceptives – some of which may be abortifacients – to its employees.

In the two-to-one ruling last week, the U.S. Court of Appeals for the Seventh Circuit denied any religious exemption for the university. Religious organizations have doggedly protested the Health and Human Services mandate, part of Obamacare’s Affordable Care Act, in courts across the country. This recent ruling has been seen as a huge blow to those efforts.

“This marked the first time that a federal appeals court had rejected a claim that the Supreme Court’s ruling last June in the case of Burwell v. Hobby Lobby Stores should shield a non-profit religious organization from any role whatsoever in carrying out the Affordable Care Act’s contraceptive mandate,” Lyle Denniston of SCOTUS blog wrote.

The ruling has frustrated Notre Dame alumni and others who see it as an infringement on strongly held religious beliefs.

“The 7th Circuit majority was just plain wrong in its application of  Hobby Lobby,” William Dempsey, chairman of the alumnus Sycamore Trust donor group, told The College Fix in a telephone interview.

“The Supreme Court said courts have to accept a plaintiff’s sincere claim of conscience, though the plaintiff could still lose if the public interest demanded it, but the court of appeals simply said to Notre Dame in effect, ‘You may feel that way but you shouldn’t,’” Dempsey said. “Still, the Supreme Court may not take this or any other case for review until some court of appeals rules against the government. So far, none have.” The Obamacare mandate requires all employer health plans to provide free contraceptives, sterilizations, and abortion-inducing drugs. The mandate provides an extremely narrow exemption for “religious employers,” which fails to cover most faith-based organizations including Catholic hospitals, universities, and service organizations.

To meet the exemption qualifications, religious employers must hire and serve exclusively people of their own faith, qualify as a church or religious order as defined by the tax code, and exist for the purpose of inculcating religious doctrine. With that, religious universities and business owners have had limited successes with their legal challenges.

Last June, the Supreme Court issued a major ruling in Burwell v. Hobby Lobby on the contraception mandate, stating that the federal regulation cannot be applied to “closely held corporations” if their owners object on religious grounds. Following this case, the court of appeals reconsidered Notre Dame’s plea for exemption, after the trial court denied Notre Dame’s request that the Obamacare mandate requirement be suspended pending the trial.

In his dissenting opinion, Circuit Judge Joel Flaum stated that “because Notre Dame offers health insurance to its students, and especially because it acts as a self-insurer for its employees, the law turns Notre Dame into a conduit for the provision of cost-free contraception…Notre Dame’s only alternative is to endure crippling fines.”

Yet alumni groups such as Sycamore Trust have been critical of the way Notre Dame itself handled the lawsuit against the Health and Human Services mandate from the beginning.

In its denial of relief, the trial court mentioned that Notre Dame’s delay in legally challenging the mandate was “a little hard to swallow.” President Rev. John Jenkins and the administration had told employees just two months prior to filing the lawsuit that they would be receiving free contraceptives. Citing “competitive necessity,” Notre Dame also provided a contraceptive and abortifacient plan to students following the mandate after considering the health plans of other major universities.

Dennis Brown, Notre Dame’s assistant vice president for university communications, did not respond to The College Fix’s request for comment. As of today, Notre Dame has released no official statement about the 7th circuit’s ruling.