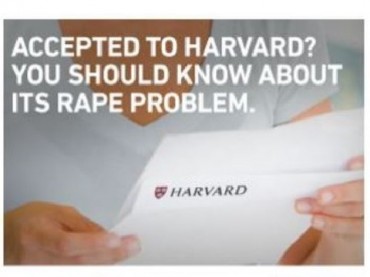 The ads popped up when prospective students researched the schools online or on social media, and offered messages such as: “Accepted to Harvard? You should know about its rape problem,” and “Florida State University has a rape problem. Find out more before you decide.”

UltraViolet told WFSU, a public media outlet in Northern Florida, that its goal is to pressure the schools to adopt anti-rape guidelines recently proposed by the White House for universities.

UltraViolet did not respond to repeated inquiries by The College Fix for comment.

Karin Roland, organizing director at UltraViolet, told WFSU that their goal is to let women who are deciding what college to attend know about assault claims facing the colleges. She also said it will force campus administrators to do more about it.

The campaign launched a few months ago, and it’s one of many the organization has tackled.

The nonprofit – whose logo draws inspiration from a vagina – also has many current campaigns in favor of gay rights and abortion. Its website encourages people to “take action” on issues like making abortion in Texas cheaper. The group is also petitioning the Princeton Review to include sexual assault statistics in its popular annual university rating guide.

Several of the universities targeted in the “rape problem” campaign expressed chagrin about it, saying the ads are “unfortunate” because they misrepresent what steps the universities have undertaken to tackle campus assault claims, the Huffington Post reported.

Dartmouth College even launched a counter-offense, creating its own ad that touted what it has done to stop campus assault, Bloomberg reported. The ads encouraged viewers to “see how Dartmouth is taking action” to prevent and address sexual assault.

“It is unfortunate that UltraViolet has failed to acknowledge the actions Dartmouth is taking, most notably our comprehensive policy proposal to take effect in June that makes expulsion mandatory in the most egregious cases of sexual assault,” a campus spokesman told Bloomberg.