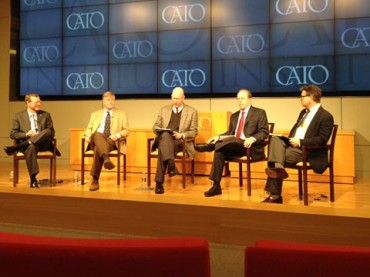 WASHINGTON, D.C. – While American colleges have continued to move away from sharing the perspectives of free market economics and traditional attitudes toward Western civilization, a new force has grown to reverse the trend.

Privately funded academic centers that promote the knowledge of these disappearing principles have started to give hope to academia, a report by the Pope Center for Higher Education Policy found.

Jay Schalin, the author of the report, discussed the objectives of the centers in a panel discussion at the Cato Institute on Thursday. He described them as “a great hope” for the intellectual future of the country.

According to the report, there are now around 150 of these privately funded centers that promote the objective study of Western civilization, capitalism and political theory, in spite of the prevailing campus winds. They started with the James Madison Program at Princeton University, led by professor Robert George.

‘Equality over everything else’ drives academic discussion

“I think of how students in the humanities and social sciences often don’t learn any real economics,” Schalin said. “They are instead taught a one-sided pseudo-economics by English or sociology professors that starts and ends with value judgments, such as a preference for equality over everything else.”

Schalin described the centers as offering a broad spectrum of scholarship rather than just a single school of thought.

Students who take a quantitative, scientific approach in their regular course of study can be exposed to a qualitative thought that tells a deeper story than just the numbers, while those who buy into theories of socially just egalitarianism can be taught that their version of utopian economics has impoverished people, Schalin said.

“We are not talking about political centers here. We are talking about intellectual centers. If some people don’t like them, it is because they threaten the politicization of the campus and reject the infallibility of intellectuals,” Schalin said.

“It is sad they are so necessary. It is wonderful that they are exploding in number,” Schalin added.

‘Connection between a free society and moral character’

Bradley Thompson, who heads the Clemson Institute for the Study of Capitalism at Clemson University, said Karl Marx and his descendants have succeeded over the past 150 years in capturing the moral high ground in economics with his Communist Manifesto by convincing readers that capitalism is immoral and unjust.

Despite the historical success of capitalism being an efficient and productive system, Thompson says, the morality argument always trumps the economics argument in a debate.

“This precisely describes why we have been going down the road of serfdom for a very long time, despite times in our recent history for instance, when Republicans controlled both houses of Congress, the Supreme Court and the executive office,” Thompson said.

Thompson said the mission of the Clemson Institute, founded in 2005, is to explore the moral foundations of capitalism to help retake the moral high ground.

Throughout the course of the year, the institute holds two lecture series and two summer conferences. Thompson and his “five or six” fellow faculty taught 18 classes during the 2013-14 school year in the political science, history and economics departments.

“We want our students to think seriously and deeply, maybe for the first time in their lives, about their moral character, because we believe there is a connection between a free society and moral character,” Thompson said.

Thompson added that the institute encourages a marketplace of ideas, and that it invites a “spectrum” of ideological views to participate in all of its events.

Christopher Hill, a fellow of the Alexander Hamilton Institute for the Study of Western Civilization, said ideological diversity at Hamilton College is “practically nonexistent.”

Founded by professors at Hamilton College, the institute was to be set up at the school itself, but opposition from progressive faculty members sunk that arrangement in 2007. It’s now an independent entity.

“What we are trying to do is to help to provide some of that ideological diversity,” Hill said.

“And we have to do it in spite of, quite frankly, significant resistance from the college, which does not like the fact at all that we exist,” Hill added.