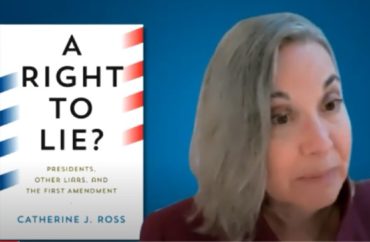 A law professor at George Washington University recently laid out her arguments for why lying by the president should be an impeachable offense.

President Donald Trump “has highlighted for us why lies in the public arena are so dangerous and also why the president’s lies are so much more dangerous and significant” Catherine Ross said at the event hosted by the University of Pennsylvania.

Trump’s lies are more dangerous “because of what they can do to society, democracy, and health,” Ross said at the Andrea Mitchell Center for the Study of Democracy virtual event. She recently wrote a book, “A Right to Lie?” that explored the topic of impeaching presidents for lying.

She began the book before the 2016 presidential election which led to a rewriting of the book.

Ross suggested an outline that Congress should follow to prevent dangerous lies from spreading to the American people.

Congress could create a standard of honesty for the president. This statement will define the kinds of lies that are allowed in office, such as those that protect the American people, Ross said.

If he refused to retract lies and continues to tell more lies, then Congress will have no choice but to impeach, and possibly convict, the president, Ross said.

Said one example of lying is how Trump handled COVID

Ross specifically mentioned health as an area of concern because Trump has “lied” about COVID-19 being a “hoax” which has endangered the American people, Ross said.

The First Amendment scholar said that Trump caused the American people much damage when he said, according to Ross, that COVID-19 was simply a “hoax” and there was no need for masks or social distancing.

A review of his remarks show that Trump referred to criticism that he had mishandled the situation as a hoax, during a February 28, 2020 rally.

“I didn’t pinpoint first use in my book because it was a phrase he repeated so often — but I find first use — like you — in late February,” Ross told The College Fix when asked to clarify when Trump used the phrase. “A few days earlier — Feb. 25 — there were a grand total of fourteen cases in the entire US. The figures began to rise just after that.”

His statements on February 28 were similar to an analysis in the liberal Atlantic magazine on February 24 which compared the coronavirus to the flu and also questioned the benefits of lockdown measures.

“The new coronavirus…that has been spreading around the world can cause a respiratory illness that can be severe,” James Hamblin, a staff writer and medical doctor who teaches at Yale University wrote.

COVID-19 “seems to have a fatality rate of less than 2 percent—exponentially lower than most outbreaks that make global news,” Hamblin said.

“Despite the apparent ineffectiveness of such [lockdown] measures—relative to their inordinate social and economic cost, at least—the crackdown continues to escalate,” Hamblin said.

At the time, not even Anthony Fauci advocated for mask mandates. The first shelter-in-place orders were not issued until March 2020.

The day before Trump made his comments, Centers for Disease Control and Prevention Director Robert Redfield said people do not need to wear masks unless they were healthcare workers or had COVID. Several days prior, Speaker of the House Nancy Pelosi visited Chinatown in San Francisco to meet with groups of people and promote business.

He also said that testing and identification of potential cases would be a better approach than lockdowns, in response to questions from California Democratic Representative Brad Sherman.

Trump had, however, said that masks could at times make situations worse, such as waiters who might fidget with masks. He echoed previous statements Fauci made about people touching their mask.

The Fix asked Ross if she could explain the differences between Trump’s comments at the time and the actions and words of Pelosi and Redfield.

“First, Trump had already told Woodward how dangerous Covid was, and that is transmitted through the air, and that it could kill people of all ages,” Ross said.

“Then he denied it was real or dangerous in public, using the bully pulpit of the presidency,” the law professor said. She said, similar to a point made by Snopes, that Trump’s “early use of the term ‘hoax’ was used in comparison to what Trump called the ‘hoax’ of his first impeachment.”

Ross explained how the CDC’s contradictory guidance on masks was different than Trump’s comments.

“Trump undermined masking for different reasons, and continued to do so long after the supply chain improved, scientific data clarified how the virus spread and how important masks were for all of us,” Ross said. (the science was and remains a work in progress) and as president, “Trump’s lies were amplified and exponentially influential in undermining public health.”