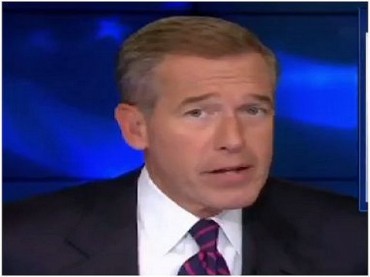 “NBC Nightly News” anchorman Brian Williams admitted on the air yesterday that he … “misremembered” events from 2003 in Iraq.

The anchor, over the last dozen years, had repeated a story of how he was in a helicopter that came under attack during the invasion of Iraq.

“Two of the four helicopters were hit, by ground fire, including the one I was in, RPG and AK-47,” he recalled.

Ironically, back in 2007, Williams told a crowd at New York University’s Department of Journalism that he had developed a strong “B.S. meter” over the years.

After years of experience in the news business, Williams said he has developed his own “strong BS meter” — he can watch the local news in any city in this country and tell you which anchors went out to dinner that night instead of staying and writing between the 6 o’clock and 11 o’clock news. Williams also said he can tell which anchors write their own copy and who’s just reading whatever pops up on the teleprompter. OnThe Nightly News, Williams reviews every word of the copy before it goes on the teleprompter. “Any time I’ve kicked a word, it’s because I’ve never seen it before,” Williams said.

The Nightly News attracts between 10 and 11 million viewers each night. But the playing field for prime-time nightly news is in constant motion, with NBC, CBS, and ABC jockeying for the top slot in the ratings game. The tremendous growth of online media — especially blogs — in recent years has altered the face of journalism.

He added that it’s often difficult to judge the credibility of a blogger. “On the Internet, no one knows if you’ve been to Ramadi or you’ve just been to Brooklyn and have an opinion about Ramadi,” said Williams.

I’d wager that much of what goes on around Vinny’s efficiency apartment is more dangerous than what a guy raking in millions per year has to face.

Williams’ “misremember” is not unlike that of Hillary Clinton, who had claimed she had come “under sniper fire” during a trip to Tuzla, Bosnia.

In the 2008 presidential campaign, the former first lady stated that she “made a mistake” about the incident.