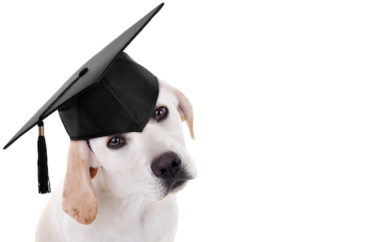 School has allowed pets since 1973, has held ‘commencement’ for pets since 2013

A private college in the Sunshine State not only allows students to have pets — but provides a commencement ceremony for graduating seniors’ furry companions.

Eckerd College in St. Petersburg, Florida, held its sixth-annual “Pet Commencement” this year, with more than 50 pets graduating in a ceremony May 9.

Dean of Students James Annarelli read the names of the animals, who walked across a stage, sometimes wearing a cap-and-gown, with their owners to receive a certificate. Photos of the pets were taken afterward.

Eckerd spokeswoman Robbyn Hopewell told The College Fix that more than 200 animals have participated in the ceremony since its inception in 2013.

“This year’s most exotic pet to participate was Sunny the Hedgehog. In past years, we have had bearded dragons, spiders and even ducks participate in the event,” Hopewell said via email, adding that “pets that meet campus requirements have been allowed to live in our housing since the 1970s.”

An online photo album of the event shows a wide variety of animals present at the ceremony, with pets ranging from dogs to the aforementioned hedgehog. A large constrictor snake was also present, as were several rabbits.

One photo shows the graduation certificate of a guinea pig named Penelope, which declares that the small rodent “has completed the required love and attention studies and is hereby graduating with the highest honor in keeping their owner sane.”

According to The Tampa Bay Newswire, this year’s ceremony was the largest ever.

Hopewell said the events come off without a hitch.

“There has never been an incident involving a human or animal at pet graduation. If a dog or cat is uncomfortable with the proceedings or being around so many other animals, the owners generally remove them from the venue as the ceremony continues,” she said.

Colleges are increasingly allowing pets on campus in one form or another. At Yale, for instance, the number of “emotional support animals” on campus there has skyrocketed in recent years, as more students turn to pets to help with anxiety, depression and other ailments.

But Eckerd College may be the only school to hold graduation for students’ furry-or scaly-friends.

Eckerd was “one of the first schools in the nation to adopt a written pet policy,” The Newswire states. The school “stands as a leader in and authority on how to successfully integrate small animals into campus life.”

According to Eckerd’s website, every October the school also holds “a pet blessing in honor of St. Francis of Assisi, patron saint of animals.”

Photos from that event show a religious minister blessing a variety of animals, including a dachshund, a cockatoo bird, and some turtles.

MORE: Number of emotional support animals at Yale increased by 1400% in last year

MORE: Prof: Use hamsters, reptiles as pets due to dog/cat contributions to climate change