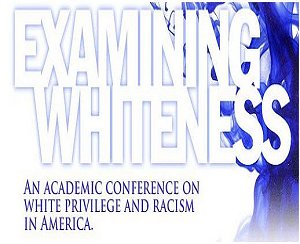 Have you ever been required to attend a “white privilege” seminar/workshop, or one of its colorfully dubbed siblings like “Courageous Conversations” or “Difficult Dialogues”?

Have you ever wondered just what the very purpose of the whole thing was … and why you had to sit through the vacuous nonsense?

John McWhorter, writing in The Daily Beast this past week, asks “When students are compelled to have ‘White Privilege 101′ classes, we have every right to ask: Why, and for whose benefit?”

To anyone other than a perpetually aggrieved “studies” major, usually the answers are “I have no idea” and “radical progressives.’ ”

“This is messy work, but these conversations are necessary,” says Sandra Chapman, director of diversity and community at Little Red School House in New York City. OK—but why? Note that the answer cannot be, “So that whites will understand that they are the privileged … etc.” That makes as much sense as saying “Because!” So I’m going to dare to ask a simple question: What exactly are we trying to achieve with this particular lesson?

McWhorter goes on to note how many progressives complain constantly that “we need conversations on race” (see: Eric Holder, for one), and rightly points out the following:

The fact that this conversation doesn’t lead to all whites bowing down to all black complaints, an outcome tacitly desired by a certain cadre of academics and journalists, does not disqualify it as a conversation.

Emphasis mine. Indeed, that “certain cadre” doesn’t want a real conversation. It wants only what McWhorter says — to give a lecture … and then a capitulation by the target audience.

But if you’re weary of being a punching bag by members of the perpetually aggrieved, you may have a remedy.

Consider: Recently, the president of the University of Oklahoma expelled several members of the Sigma Alpha Epsilon fraternity due to a video depicting a disgusting racist chant. One of  UO President David Boren’s rationales for the swift action was that the video created a “hostile educational environment.”

This, even though the video was never intended to be viewed by the general public.

But even if it was, say, uploaded to YouTube, since anyone can choose to ignore the moronic recording, the charge of “hostile educational environment” remains specious.

“White privilege” seminars (and their equivalents), on the other hand, are typically a mandate — in an educational or employment setting. Meaning, you know, one just cannot choose to refuse to show up and/or exit when things get farcical.

Former Department of Education attorney Hans Bader says you don’t have to sit there and be racial quarry merely because you’re the wrong hue. And if someone insists you do, you have a legal remedy:

If [the Pacific Educational Group’s Glenn] Singleton inflicts his racist insults on a captive audience of teachers at a training seminar, they may well have a Section 1981 or Section 1983 claim against him for racial harassment. As cases such as Markham v. White (1999) and Ascolese v. SEPTA (1996) show, the amount of repeated abuse required for a hostile training environment claim by a public employee is much lower than for a hostile work environment claim, where isolated racist remarks are not actionable.

Moreover, he may be subject to individual liability for aiding and abetting discrimination under 42 U.S.C. 1981. Contrary to Singleton’s racist belief, racism is not a white monopoly, as the federal appeals courts have recognized in holding institutions liable for harassing or mistreating their white employees. See, e.g., Bowen v. Missouri Department of Social Services (2002) (racial harassment of white employee by black co-worker); Taxman v. Board of Education (1996) (school board liable for termination of white teacher).

Arlington County and Singleton should keep in mind that “diversity” training seminars that denigrate people based on their race or gender can give rise to successful harassment lawsuits, such as Hartman v. Pena (1995), which allowed a white male to sue for sexual harassment over an insulting gender-awareness seminar, and Robinson v. Reed (1978), which allowed a woman to sue for invasive questions in a race-relations seminar.

Of course, being who the perpetually aggrieved are, they might try to counter such a legal caution with something out of this playbook since the very concept of the law applying equally to everyone is often anathema to them.