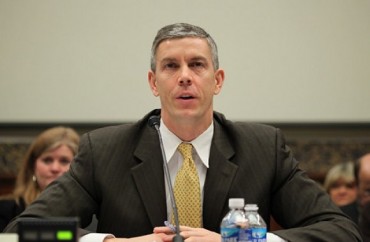 Former US Secretary of Education Arne Duncan says the “marginalization” of Chicago’s current generation — the “lack of educational and economic opportunities” — needs better solutions other than just policing.

Kids don’t turn to criminal activity just because they’re bad kids, he says. “When the gangs are the only ones hiring […] it is no wonder that the cycle of violence continues.”

The secretary adds that the “best use of any single tax dollar is in creating more opportunities for high-quality preschool.”

Despite a Department of Education initiative to improve funding for such programs, the U.S. still ranks low among the international community in its commitment to early education. The ones who are most negatively affected by low funding for pre-K programs are members of disadvantaged communities, with the average poor child beginning kindergarten “12 to 16 months behind” other children in their class. Duncan insists that starting early in education is key to improving opportunities and addressing social issues. “This is the right thing for kids, the right thing to strengthen communities, and the right thing if we want to be competitive in the global economy.”

Secretary Duncan then turned to how the American education system compares to others within the developed world. He explains that the greatest impediment to successful education reform is the tendency to argue about what the goal of education should be, when the answer is clear: “to have the best-educated workforce in the world.” He encourages voters to maintain a bigger picture view of American education, keeping in mind that the most important competition is not between school districts or states, but rather between the U.S. and other rising nations. Duncan says that we’re so decentralized and fractured that we’re missing the bigger picture. “We need national goals, we need a national strategy….when we play small ball rather than look at the big picture we not only hurt kids, I think we hurt our nation.” Movements such as the Common Core are a major step in the right direction, but people must remember that investments in education pay their dividends in the long-term.

But why is a national strategy required when the needs of states and localities varies — widely in many cases? Wouldn’t inner-city Chicago’s demands be different from, say, that of rural Tennessee?

Thus far, the results of federally funded early education programs like Head Start are modest, at best. It would seem that targeting funding for the specific requirements of a geographic/demographic region — rather than utilizing a one-size-fits-all approach — makes the most sense.

But big government Democrats don’t usually think that way. As Frederick Hess pointed out last October, although Duncan called for billions more in funding for pre-kindergarten programs, unfortunately it came “with thousands of federal regulations governing the most minute details.”