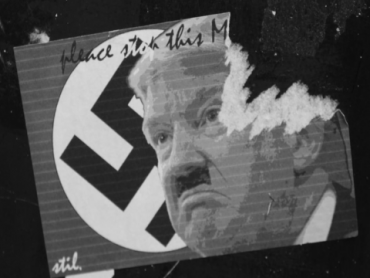 Mountain View High School’s Frank Navarro has been in the classroom for an amazing 40 years, teaching history and special education.

But this will be his last year. According to KQED, he was briefly suspended after his administration received a parent complaint claiming he said “Donald Trump is Hitler” and “Trump hates Jews, Mexicans and African-Americans.”

Navarro admits he did use a lesson in which he compared the president-elect to the infamous German dictator, but says he did not state what the parent had written: “I would never say that because it was sloppy historical thinking.”

“Adolf Hitler said he’d make Germany great again. Donald Trump said he’s going to make America great again,” Navarro said. “Hitler focused on the Jews as the great peril of Germany, and Trump focused on the Muslims and talk about a registry and keeping Muslims out of the country.”

Navarro is an expert on the Holocaust and has studied at the International Center for the Study of the Holocaust in Jerusalem. The 65-year-old was also named a Mandel Fellow for the U.S. Holocaust Memorial Museum in Washington, D.C. …

That’s when his principal brought forth the complaint. According to the veteran teacher, the principal said nothing when Navarro offered to discuss it with him and the parent “over coffee.”

Two days before the election, Navarro was asked to come to the principal’s office with a union rep. An assistant superintendent read the parent letter which claimed Navarro had said “Trump is Hitler.” There were additional accusations he had never heard about previously.

“I was also accused of feeding propaganda to my students and real bias, and then I was quickly informed I was on leave. I was to leave the campus immediately,” Navarro said.

Navarro said he was told he would likely be returning to campus the following Wednesday after an investigation, including interviews with students.

At this point, Navarro doesn’t believe there was an investigation because the students left school an hour after he left campus and they had Friday off for Veterans Day. He was back on the job Monday after the superintendent called him over the weekend.

Navarro had been considering retiring at one point, but said he was planning to put it off for a couple of years because he loves the exchange with students.

Navarro claims the district superintendent “privately apologized” to him, “admitting the situation wasn’t handled properly.” Navarro said he wanted a public apology, but the super refused.

— It was patently stupid to invoke Godwin’s Law in a classroom history lesson. Any president, regardless of political party, could conceivably be compared to the Nazi leader in some way. At times, right-wingers said President Obama’s views on guns paralleled Hitler’s. I can imagine some parents would be miffed if a teacher used that comparison in a history lesson.

History teachers, in particular, have a duty to be as bias-free as possible when discussing politics. The classroom is not a forum for pontificating on your personal views. If Navarro had presented the lesson like “Some who differ with Mr. Trump say …” and countered it with the Obama gun example, that would be neutral and would allow students to consider more than one perspective.

— In Navarro’s defense, he has every right to be peeved at not being able to see the parent complaint letter, not to mention at the fact that other “concerns” were just now brought forth. Too often, what actually occurs in the classroom is not what a kid tells his parents. And sadly, too often, parents believe what their kids tell them as if fibbing, and at the very least embellishment, aren’t a common part of a teenager’s existence.

— In the administration’s defense, it does seem as though Navarro was hemming and hawing about the lesson with regards to what the parent alleges in the complaint. Stating “I didn’t say that Trump is Hitler, I just said he did a lot of the same things” isn’t exactly making a substantive distinction.

It’s a shame Navarro and the administration couldn’t work things out to everyone’s satisfaction. These days, 40 years is a long time to last as a classroom teacher; it takes special kind of person to stick it out four decades.