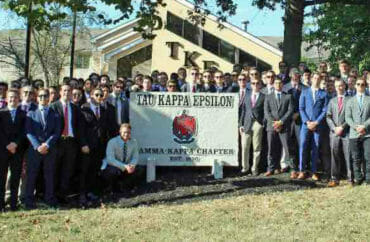 ‘I think we really went above and beyond to help him’

Indiana University-Bloomington handed out similar punishments to a student organization that left one its members licking water off cave walls for survival, and a fraternity that rushed a new member to the hospital after fainting in their party room.

TKE Gamma Kappa has raised about $4,500 toward a $5,000 goal to pay a lawyer to challenge a cease-and-desist order from the student ethics and student life offices, which claimed the new member’s injury during fall initiation resulted from hazing.

Campus police determined that the fainting spell was a “freak accident,” but the campus bureaucracy “never provided us with a hearing which would be inconsistent with due process guidelines set forth in the U.S. Constitution, which apply to public, taxpayer-funded universities.” says the fraternity’s GoFundMe page, started Nov. 14 by spring initiate Eric Field.

This chapter has reached over 120 active members since it started with “4 students in a dorm room” five years ago, Field wrote, but it’s still too new to have “the resources to seek legal representation” in a formal meeting with the administration.

A member of the fraternity, who told The College Fix he fears retaliation because the university has threatened other members who spoke out, said the incident took place after new-member induction and group pictures were taken.

The fraternity brothers and new members were asked to await the executive board’s speeches inside TKE Gamma Kappa’s party room, the brother told The Fix in a phone interview.

Everyone was encouraged to pick up trash in the room, which hadn’t been cleaned since the previous party, while they were waiting.

While doing so, one of the inductees fainted and hit his head on the concrete floor, breaking his jaw. The anonymous brother agrees with Field’s assertion on the GoFundMe page that the whole thing was “a complete freak accident.”

Saved him the cost of an ambulance

The injured initiate panicked about the costs associated with going to the hospital in an ambulance, the anonymous brother told The Fix. That’s why his new fraternity brothers drove him to the hospital and promised to cover the other expenses: “I think we really went above and beyond to help him.”

The anonymous brother, who did not go to the hospital with them, said he didn’t know why the new member fainted or if he had a pre-existing condition.

The cease-and-desist order was handed down in the aftermath of the incident, long before the fraternity was granted a hearing on the allegations. According to the brother, at first it prevented any six members of the fraternity from being together in one place at any given time, but recently it was raised to 10 people together when alcohol is present.

The fundraising page says not only are they not allowed to hold chapter meetings, but the university banned the fraternity’s fall fundraiser for Riley Children’s Hospital and St. Jude Children’s Hospital, which last year raised $10,000.

“They took away all organizational liberty without any sort of hearings,” the brother told The Fix.

When the administration finally granted TKE Gamma Kappa a hearing Nov. 27, the brothers brought a lawyer with them, suspecting the the university would treat them unfairly.

After the hearing, the fraternity was given a 13-month deferred suspension, according to the brother. But the Student Affairs office list of “university organizations subject to discipline” for this academic year, last updated Dec. 3, shows a different punishment for TKE: “Disciplinary Probation” that runs from Sept. 15 through March 16, for “Alcohol, Non-compliance with the Greek Organization Agreement.”

Under deferred suspension, if the fraternity does not complete “lesser sanctions” within a deferred period of time, the original sanction will apply and the organization can’t appeal. Under disciplinary probation, the fraternity is only at risk if it violates its probation conditions or commits “further acts of misconduct.”

The brother told The Fix that the administration’s discipline list may nonetheless be out of date – alcohol wasn’t involved in the new member’s fainting. He said the fraternity only received the charge letter Monday, two weeks after its hearing.

The anonymous brother called the suspension “unprecedented,” arguing that it’s inconsistent with the severity of punishments handed out to other student organizations. He cited the university’s Caving Club, which made national news the same month as the TKE incident when one of its members was left in a cave for more than two days. Its punishment? A 12-month deferred suspension.

Sarah Brenia Tosick, correspondence specialist in the president’s office, referred The Fix to the university’s media relations department. Director of Media Relations Charles Carney declined to comment in an email.

The fraternity’s housing director promised The Fix a reply by Monday night, but none had been received by the time this article published.

CORRECTION: Due to an editing error, the original article misspelled the name of the GoFundMe page creator. His name is Eric Field. The anonymous brother also told The Fix after this article published that the restrictions on brothers gathering together were recently loosened. Changes have been made accordingly. The article has also clarified that the fraternity did not receive a hearing before it received a cease-and-desist order.