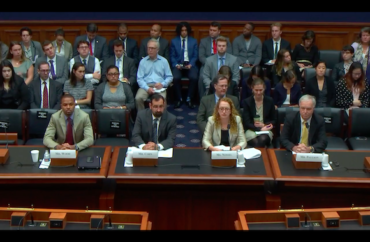 A congressional hearing addressed the status of the First Amendment on college campuses on Wednesday, and witnesses argued that students are using the principles of freedom of speech to protect themselves from offensive speech rather than empower them to speak out.

Congress was also warned that some students have come to see free speech as a politicized weapon used to intimidate them and insult them, a dangerous precedent that does not impart the principle’s founding ideals. However, committee members pushed back, saying that free speech is being used as political cover for hate speech.

“We run a real risk of raising a generation that’s alienated from its core principle, and that’s one of the dangers of politicizing this issue,” Susanne Nossel, CEO of PEN America, told the U.S. House Committee on Education and the Workforce.

She and three other witnesses appeared before the committee. Zachary Wood, a writer and former president of Uncomfortable Learning at Williams College, FIRE Legislative and Policy Director Joe Cohn; and Ken Paulson, president of the Newseum Institute’s First Amendment Center, also testified.

The discussion covered a range of topics, as the witnesses testified on issues from groupthink among professors to the constitutionality of free speech zones to the blacklisting of campus fraternities.

Rep. Virginia Foxx, a Republican from North Carolina, made the remark at the beginning of the hearing that “the land of the free has become the home of the offended.” Later in the hearing, an exchange between committee members and witnesses addressed the idea that the First Amendment is misunderstood by students, and is instead weaponized and politicized to justify hate speech or stifle it.

“Censorship has rarely worked,” Cohn said. “It doesn’t really work to eliminate hateful views. The value of hate speech in the public square is that it can be refuted. It helps us diagnose the extent of the problem and how common it is. So we need to allow speech to proceed unless it actually crosses the legal threshold on incitement, which is particularly high.”

Wood added that he drew the line when speech becomes direct incitement to violence.

However, Frederica Wilson, a Democrat from Florida, pushed back on this point. She asked about the relationship between hate crimes and free speech and pointed to incidents such as the murder of Richard Collins III at Maryland and to a fraternity that hosted a party that contained offensive Mexican stereotypes.

“So yes, I am concerned with what is taking place on our campuses. Students are being singled out and harassed on the basis of their race, religion, sexuality, and physical ability,” she said. “I fear that the value of free speech is being used as political cover in a manner inconsistent with the First Amendment to harass and assault our most vulnerable student groups. We must not make the mistake of creating a false equivalency between the responsibility we have to protect the rhetoric of white supremacists and defending our female, LGBTQ, black, brown, Muslim, and disabled students from hateful attacks.”

She proceeded to criticize the concept of “both sides,” and asked Nossel a question about when the First Amendment is most often invoked on college campuses.

Nossel’s response pointed to controversial speakers who are invited to college campuses with the purpose of being provocative and the desire to use time, place, and manner restrictions to control when and where objectionable figures can speak.

But she cautioned against turning to the First Amendment because of how students can misinterpret its principles.

“I think the real risk of this is that students come to know the First Amendment as something that’s relevant only to protect speech that offends and intimidates them, and I think that’s dangerous,” she said. She continued that one student had said to her that the First Amendment “wasn’t written” for that student, adding that the only time the student heard freedom of speech invoked was to protect speech targeting her.