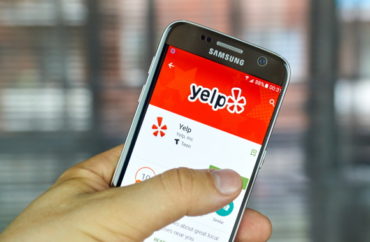 Several years ago, colleges concerned about racism on campus began setting up what they called “Bias Response Teams” — online systems where students and professors could anonymously report one another for perceived bias relating to race, ethnicity, sexual identity, or otherwise.

Oftentimes the targets of these complaints must meet with diversity counselors or have a letter placed in their file indicating their alleged insensitive statement or action, which, for professors or faculty, can harm their chance of being hired in the future.

But the idea of having anonymous individuals report each other for alleged racism has now taken off outside college campuses.

On Friday, the online business rating service Yelp announced it would be placing “consumer alerts” on some businesses to “warn consumers about businesses associated with egregious, racially-charged actions to help people make more informed spending decisions.”

Now, when a business gains attention for reports of racist conduct, Yelp will place a new Business Accused of Racist Behavior Alert on their Yelp page to inform users, along with a link to a news article where they can learn more. https://t.co/1K2bJ46uM8

In the wake of the death of Minneapolis man George Floyd and other African Americans at the hands of police, businesses have sought to keep customers by going out of their way to present messages supporting social justice. But the Yelp model does the opposite – it seeks to punish businesses that aren’t sufficiently “woke” according to some customers that may have an axe to grind.

Just as on college campuses, the effect will be to blacklist businesses that may not subscribe to the most extreme brand of social justice activism.

“Now, when a business gains attention for reports of racist conduct, Yelp will place a new Business Accused of Racist Behavior Alert on their Yelp page to inform users, along with a link to a news article where they can learn more,” the company tweeted on Friday.

But the policy immediately came under criticism, perhaps most succinctly by Donald Trump, Jr.

“The bullshit never ends,” tweeted Trump, adding, “What are the odds that this isn’t insanely abused?”

According to Yelp, its employees will investigate when a business begins to see an inordinate number of race-related ratings on its site. A company spokesperson told The Washington Post that Yelp saw a 277 percent increase in “the placement of unusual activity alerts for media-fueled review storms” just in the months between May and June alone – as if businesses abruptly became more racist following Floyd’s death on May 25.

If the reported incident involves racism, Yelp says it will disable comments, then affix a notice that someone “associated with the business was accused of, or the target of, racist behavior.” According to Yelp, this will happen when “resounding evidence is found” of racism.

In many cases, these designations will determine whether a business will survive or be forced to close.

Further, it is both unclear what investigative tools Yelp has at its disposal and what it will consider to be “racism.” Under the guidelines set by Yelp, it seems that a company with an employee accused of racism who is then fired will still be subject to the racism designation, since it occurred with an employee who was active at the time. There is no indication a business can avoid being deemed racist even if it does the right thing to solve the problem.

Further, as campus bias systems have shown us, “racism” is entirely subjective. Many professors have been reported as racist for using historical slurs in the context of reading classical literature, with some having to leave their jobs.

Some businesses will no doubt see complaints for similarly superfluous reasons. A bookstore that carries books with outdated racial terms might be reported, as might a fast food restaurant that fails to eject an unruly customer in a timely manner. Baristas at coffee shops like Starbucks are often accused of being racist for failing to spell customers’ names correctly.

In 2017, two white women who opened a burrito truck in Portland were forced to close when they were accused of racist “cultural appropriation” for using recipes they learned while in Mexico.

Social media campaigns meant to bully businesses into closing have become commonplace, and aren’t limited to racial issues. For instance, in 2018, Yelp commentators tried to close down a Madison, Wisc. pizzeria when a manager emailed an employee a file with the title “dumb bitch.” The restaurant survived, but saw sales drop by $25,000 per month over the previous year.

In 2018, former Secretary of Homeland Security Kirstjen Nielsen ate a meal at MXDC Cocina Mexicana in Washington, D.C. – but protesters confronted Nielsen in the restaurant and flooded the restaurant’s Yelp page with complaints given the Trump administration’s policy of separating children from their parents at the U.S. – Mexico border.

Yelp said MXDC likely wouldn’t get the designation, as “this business doesn’t seem to have been involved in an incident involving racism.”

But it remains to be seen whether a company like Yelp, who thinks it is wise to crowdsource accusations of racism that could close down businesses, will be able to withstand the most extreme voices wanting to punish those businesses.

And if Yelp doesn’t further capitulate to the mobs on the left, it might end up having to slap itself with a “racism” designation.