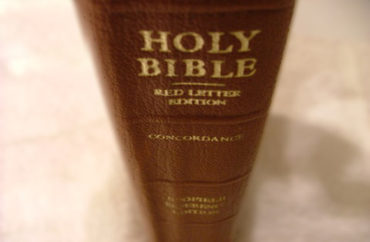 In November 2019, a George Mason University professor stumbled upon a Bible and an accompanying CD in her classroom. The professor collected the items and immediately reported the items to the school’s Bias Incident Reporting Team, which classified the episode as “discrimination” and “harassment” against “religion.”

The professor accompanied her report with photographs of the Bible, and the items were collected by the Bias Team.

The incident was one of 12 filed with the school’s bias reporting website between January 1, 2019 and January 1, 2020 and obtained by The College Fix through an open records law request. The documents provided by the university were redacted to protect the privacy of students involved.

According to George Mason’s Campus Climate website, students and professors are encouraged to report and “act of discrimination, harassment, intimidation, violence or criminal offense committed against any person, group or property that appears to be motivated by prejudice or bias.”

“Such bias incidents may be intentional or unintentional and affect the individual or Mason community,” according to the school’s bias reporting website.

“Our bias reporting and response protocols appropriately balance our efforts to strive for a bias free environment while protecting the individual rights to free speech,” said GMU spokesman Michael Sandler in an e-mail to The Fix.

“Our policies have been vetted by university counsel and have been endorsed by free speech advocates outside the university,” said Sandler, adding, “Mason also has the highest rating from The Foundation for Individual Rights in Education (FIRE), which rates universities on their ability to protect students and faculty members rights to free speech, freedom of association, due process, legal equality, religious liberty and sanctity of conscience.”

In a September 2019 incident, a student reported a communications professor for asking the student to give up an accommodation that allowed them to turn in assignments late. The student said the professor made them feel “very unsafe” because she implied the student was “taking advantage of disability services.”

The professor then allegedly asked the student what the special accommodation was for, which the student said “is not something that I feel comfortable sharing.”

“She also pulled my [study] partner out of the room and tried to pressure her into making me present,” said the student. “My partner currently has a concussion and the professor claimed that she was faking,” reported the student.

“I feel that this teacher has a pattern of discrimination which goes against George Mason’s code of ethics,” the student wrote. “I feel that she is not a safe person to have in the classroom,” reported the student.

The student said among those notified were the GMU Compliance, Diversity and Ethics Office, the Office of Disability Services, and “all my friends.”

In another incident, a student in the multi-cultural/multil-lingual education program overheard two middle-aged women in the admissions office discussing their frustration with so many students waiting until the last minute to turn in their transcripts. One of the women allegedly said she was particularly frustrated with international students who used excuses like time differences and language barriers to ask for filing extensions.

“This sort of discrimination and prejudice from the university’s own admissions office is completely egregious and unacceptable,” wrote the student. “It is also entirely unprofessional that these employees were having this conversation in a public area in front of other students,” the student said, adding they now feel “extremely uncomfortable and unwelcome” at George Mason University.

Other reports filed with the school included:

· At a Presidential Search Community Session in October 2019, a transgender student rose to offer an opinion and ask a question. The student said the leader of the search committee “cut me off before I could finish my question and very aggressively and very condescendingly confronted me, in front of the entire room, about my question without providing an answer.”

“I could not help but notice that the only trans woman in the room was silenced while others were allowed to go on, essentially as long as they wanted to,” reported the students, adding, “To me, this incident very clearly displayed an act of casual, if not outright, transphobia.”

The student never reported the question asked or the opinion offered.

· In November, a group of campus police officers began asking students in the Mason Global Center if they could recognize a thin black man in a photo taken by a security camera. According to one student, “It was clear to me that he was insinuating that he wanted me to direct him to anyone matching the suspect’s description, no matter if I was sure it was them or not.”

“It was an extremely uncomfortable situation that was not only undoubtedly rooted in racial discrimination, but one that makes the entire community very discontent [sic]” the student reported.

· A student complained that the Facebook group “GMU GeneralPosting” is “well known for its systemic bias against African Americans and other POC.”

Updated to include a statement sent by a George Mason University spokesman after the article was originally published.