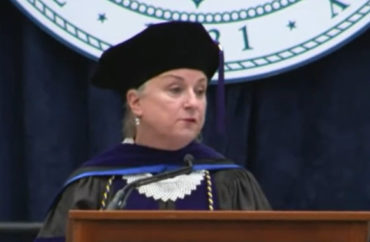 The commencement speaker at George Washington University Law School’s graduation ceremony this weekend lashed out at a professor at the school, drawing a stern rebuke.

“You must be wary of those seeking to use their influence and their expertise to wrongful ends,” Wild told the graduates.

Turley is a nationally recognized legal scholar and frequent pundit on legal matters and holds expertise in constitutional law. But despite his classical liberal leanings, he has become a fan favorite among conservatives for calling out the excesses of the progressive left.

“GW Law, for example, has a tenured professor who is without question well versed in constitutional law but has recently made a name for himself on cable news and social media by undermining his own past well documented scholarship,” Wild said.

“A law professor who at one time strenuously advocated that a president need not commit an indictable offense to be impeached and in just this past year argued the opposite for a president more to his liking. A president no less who instigated an insurrection and a bloody assault on our democratic process and the rule of law.”

On his website, Turley objected to Wild’s choice of venue for her attack and suggested she apologize.

“If Rep. Wild believes that I have misused my academic position for ‘wrongful ends,’ this was the wrongful means to raise such false allegations, particularly without a modicum of research,” Turley wrote.

“Remarkably, everything else that Rep Wild said in that statement was overtly false,” he said.

“First, it is not true that my testimony was influenced by my preference of Trump over Clinton. To the contrary, in the Clinton hearing, I testified that I voted for Bill Clinton. In the Trump hearing, I testified that I voted against Donald Trump. None of that had bearing on my constitutional views, but the suggestion that I favored a president ‘more to [my] liking’ is absurd. Indeed, in the Trump hearing, I criticized the call with Ukrainian President Volodymyr Zelenskyy and noted my disagreement with the positions of President Trump.”

Turley further noted that he believed Trump’s first impeachment was different from the impeachment of Bill Clinton because the latter had committed a criminal offense – perjury.

“I repeatedly stated in both the Clinton and Trump hearings the same position on indictable offenses,” Turley wrote. “I expressly stated that impeachment articles do not have to be based on criminal or indictable acts. I have argued that past Congresses have often looked to the criminal code and cases as a measure of alleged impeachable offenses – a practice that I support. However, I emphasized that indictable criminal acts are not required by the Constitution.”

“Make no mistake: this is by no means an easy decision,” Wild said during Trump’s first impeachment, when he was charged with pressuring Ukrainian President Volodymyr Zelensky to dig up dirt on presidential challenger Joe Biden. “Throughout this process I was patient and deliberative, speaking out only when the President left me no choice but to do so.”

Wild called Trump’s conduct “an egregious violation of our system of checks and balances and a betrayal of the vision set forth by our founding fathers of a government composed of three coequal branches.”

“It is, of course, ironic that Rep. Wild would instruct our graduating class on being righteous lawyers by making a demonstrably false allegation against one of their professors,” Turley wrote at his website.

“Her attack on use of the law for ‘wrongful ends’ is clearly based on her disagreement with my views. However, rather than simply disagree with those views in a respectful and factual way, she made false public allegations against my character and academic integrity.”