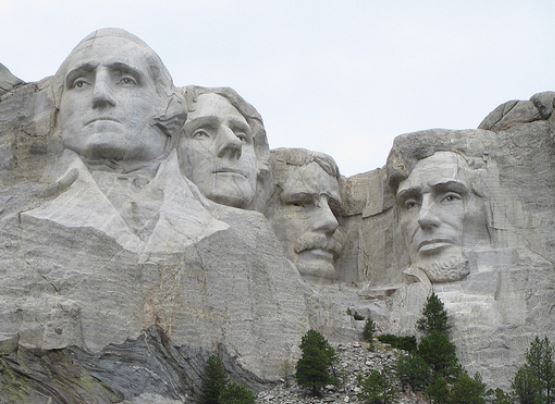 A handful of George Washington University political and history professors largely support the idea of adding President Barack Obama’s face to Mount Rushmore – just not quite yet.

According to a survey conducted by The College Fix, three out of the 10 George Washington University history and political science professors questioned via email replied it’s simply too soon for Obama’s likeness to be immortalized on Mount Rushmore National Memorial.

But he very well could and should be added – eventually – the three educators said.

“Historical judgments take time to form and Obama is still in office,” said history professor Edward Berkowitz. “It could be that he will be one of the great presidents, worthy of having his likeness carved on a mountain, but certainly not yet.”

Professor Paul Wahlbeck, a professor and chairman of the political science department, said he is “reluctant to venerate political leaders while or shortly after they served,” but still remains optimistic.

“History undoubtedly will accord President Obama a special place by virtue of being the first African American President,” Wahlbeck said in an email to The College Fix.

The three professors seemed united that a president’s legacy should not appear prematurely.

Political Science Professor Robert Stoker, who specializes in social policy and authored an article in January claiming that Social Security does not add to the nation’s debt, voiced skepticism about venerating Obama’s legacy too soon.

“At least the Republicans waited until Reagan was no longer in office.”

Of the remaining George Washington University professors surveyed, one declined to weigh in, and six simply said “no” to the question of whether Obama belonged on Mt. Rushmore.

Dedicated in 1941, Mount Rushmore, located in the Black Hills of South Dakota, has only four faces etched into eternity at this time: George Washington, Thomas Jefferson, Theodore Roosevelt, and Abraham Lincoln. To be added to that list would be one of the highest honors bestowed on any American, alive or dead.

With that, perhaps it’s no surprise that some professors at George Washington University can eventually see Obama – a democrat and America’s first black president – added to Rushmore sometime in the future.

The university has a reputation as a school with an inclination for liberal bias, where two gay students took aim at a campus priest, a law professor taught students how to lobby for Obama policies, and an abortionist practices on campus grounds next to a residence hall.

According to the Federal Election Commission, professors funneled $132,702 into Barack Obama’s campaign in the 2012 election cycle.

None of the professors surveyed financially supported Obama’s campaign in the 2012 election cycle, but more than a few have vocally supported liberal causes.

While those at GW think President Obama’s legacy is too soon to be etched on a monument, countless others have picked up the slack to name things after our current president before his time using taxpayer money.

•Florida: A street has been re-named “Barack Obama Avenue” in Opa-locka, FL in February 2009 after the city commission “voted unanimously” to rename part of Perviz Avenue and make it official on President’s Day.  USA Today, January 2009.

•Florida: There is also a parkway in Orlando named “Barack Obama Parkway” that is about one and a half miles in length that was dedicated by Orlando’s mayor in October 2011.  The Blaze, October 2011.

•New Jersey: “A Plainfield public high school for at-risk students has been renamed for President Barack Obama, becoming the first school in the state to adopt the change.” The Star Ledger, February 2009.

•Wisconsin: The Milwaukee Public School Board voted in April 2011 in a “5-4 vote to approve naming a school after the current president.” Milwaukee Journal Sentinel, April 2011.

Editor’s Update: Five days after this article was published and picked up by national news outlets, Professor Paul Wahlbeck contacted The Fix to clarify that “my comment that President Obama would receive a special place in history did not mean it should be on Mount Rushmore.”