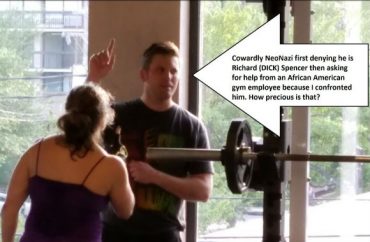 Guess whose gym membership got canceled

You might recognize her name from a few months ago, when we noted she had been accused of cyber-bullying former Georgetown colleague Asra Nomani, a Muslim woman who supports Donald Trump.

Now the accomplished professor, a member of the Council on Foreign Relations, has set another example for her students: If you dislike someone and you see them in public, it’s your moral duty to harass and intimidate them.

Fair saw alt-right leader Richard Spencer working out at her gym and decided the appropriate response was getting in his grill – and then bragging about it.

She wrote on Tumblr that she “exploited the full range of my first amendment [sic] entitlements” by cornering Spencer at Old Town Sport&Health, which is near Spencer’s think tank in Alexandria, Virginia:

First, I want to note that this man is a supreme coward. When I approached this flaccid, sorry excuse of a man and asked ‘Are you Richard Spencer,“ this pendulous poltroon said “No. I am not.”  But of course he was. …

Fair writes how shocked she was when Spencer called over a gym employee to intervene when this tantrum-prone person cornered him, because the employee is African American. (She might be interested to know he also did a respectful interview with the comedian and CNN host W. Kamau Bell, who is black.)

Even worse was when another gym patron “defended him and yelled at me for making a scene and threatned [sic] to call the police”:

I told her that when she googles this wretch, she should be ashamed of herself and apologize to me and every employee at this gym who must suffer the indignities of treating this man like a civilized person when he is orthogonal to a civilized person. He a hateful, white supremacist who has no place in this century..much less our gym.

Threatens to rape him

Fair can’t resist showing off her superior vocabulary, calling Spencer a “pendulous poltroon” (floppy coward), “flaccid, sorry excuse of a man” and “pusillanimous shitbird.” She can’t resist joking about violently raping him as if she were criminally hazing a Greek pledge:

Also..fuck him again. With a giant strap-on and no lube.

Imagine the university’s reaction if a salty conservative professor said anything remotely like this about a colleague with views that are abhorrent to mainstream society (a not-insignificant percentage of the elite professoriate).

The professor harassing a guy who’s simply trying to exercise has the gall to say this:

In my book, this is a clear case of a hostile environment being perpetrated by the general manager, who is an indifferent, asinine white feller who demanded that I remove my “Puck Trump” hat a few weeks back while asserting the “right” of this Nazi to join our gym some two months ago.

She even threatened to organize a lawsuit against the gym on behalf of its employees, as well as a boycott, if it didn’t ban Spencer and fire the general manager who tried to protect a customer who did nothing more than work out by his lonesome, unlike a certain shrill elitist with no self-restraint.

And it worked. Spencer showed his termination letter to BuzzFeed, telling the publication he doesn’t interact with anyone at the gym and never made any trouble: “I really just go and lift weights.” He denied his identity to Fair because “I didn’t want to get into a confrontation.”

If only he knew Fair’s history of bullying people for views she loathes.

The professor, of course, conflated harassing someone in public with the civil rights movement of the 1960s. Here’s what the “pissed off feminist nontheist” wrote on Twitter.

Fair had the temerity to complain that she had since been subject to online harassment after she physically harassed someone who was minding his own business.

She told The Washington Post that a corporate representative of the gym had personally contacted her to say Spencer had been banned from the gym, and to ask her to come in to provide more details:

Gee, I wonder where college students are getting their tactics?