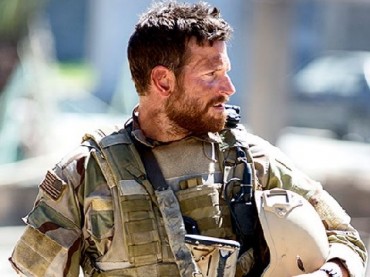 This time it’s happening at Northern Illinois University, where a veterans group will screen the film about Chris Kyle as “part of a day-long series of events to highlight the problem of homelessness among military veterans,” EAG News reports:

Learning of the film’s showing on the NIU campus prompted a leader of the Muslim Student Association, Umraan Syed, to write on the group’s Facebook page that “I consider veterans and our military to be the real terrorists.”

After a lengthy discussion on the group’s Facebook page, Syed and the NIU-MSA appear to have settled on countering the showing of the film by setting up a table near the event to spread their message that the film is a misrepresentation of Muslims and promotes “Islamophobia.” …

In addition to calling veterans [who served in Iraq] and the military “terrorists,” Syed also said that Chris Kyle was “clearly” a “maniac” that “terrorized innocents.”

The veterans group explicitly said on its GoFundMe page for the screening that this isn’t about politics:

The NIUVA was going to show a screening of American Sniper at nighttime because it accurately portrays the struggle many veterans face with PTSD and adjusting back to normal life. Our event is to shine a light on veteran homelessness, not to make some political statement.

In response to Syed’s stated fear that Muslim students might be physically attacked by veterans at the screening, one Iraq veteran at NIU said:

“I find this rather insulting to be honest. This was an event to highlight veteran homelessness, never once did we say anything degrading about Muslims. The mentality is that veterans are basically crazy and will fly off the handle. That stereotype needs to stop.”