‘Small kerfuffle’ that says a lot about the faculty

When Lindsay Shepherd publicized her university’s investigation of her classroom curriculum, some supporters predicted the school would punish the graduate student on a technicality, rather than directly challenge her academic freedom.

A professor allegedly accused her of violating the university’s “non-academic code of conduct” by copying and pasting a portion of the professor’s syllabus in a critical tweet.

The morning after Shepherd’s tweet about the alleged copyright infringement, she said the administration told her she did not violate any school policy. The administration separately confirmed to The College Fix that Shepherd was in the clear.

“Although this was just a small kerfuffle, it shows that Communication Studies faculty are still misinterpreting and misapplying policy in order to push their agenda,” Shepherd told The Fix in an email Wednesday.

Shepherd has often used her two-month-old Twitter account to tangle with critics of her decision to show a TVOne debate on gender-neutral pronouns during a Communication Studies class she was teaching.

She occasionally tweets about being treated differently by faculty and students because she secretly recorded a meeting where faculty grilled her about showing students the debate.

On Christmas Eve, Shepherd tweeted a cropped image of the “land acknowledgment” in the syllabus for Canadian Communication in Context, which is part of her department.

The class is taught by Prof. Judith Nicholson, whose areas of expertise include “mobilities and race,” “critical gun studies” and “flash mobbing.”

MORE: Shepherd could lose her job under parameters of investigation

I wonder how indigenous people feel about the holier-than-thou "SJWs" who use land acknowledgments to virtue signal. This land acknowledgment is on a course syllabus. I see them in email signatures too. (If you don't know what these are, look here https://t.co/heCa5yfWv3) pic.twitter.com/TV1pQWWcGs

She cited the Laurier Students’ Public Interest Research Group, which defines land acknowledgments as formal statements that acknowledge “the unique and enduring relationship that exists between Indigenous Peoples and their traditional territories.”

They are meant express “gratitude and appreciation” for the “long standing history that has brought you to reside on the land,” and they exist in the context of colonialism, “a current ongoing process.”

On Tuesday night, Shepherd tweeted that she had been “told that this tweet breaches WLU non-academic code of conduct.”

“I took a cut-out of a course syllabus, which apparently constitutes intellectual property,” and was allegedly warned she “will get a note of breach on my file & Dean will be notified” if she didn’t delete the tweet.

MORE: Sharing your professor’s syllabus may get you in legal trouble

I was just told that this tweet breaches WLU non-academic code of conduct becuz I took a cut-out of a course syllabus, which apparently constitutes intellectual property. I was told to delete it, and if I don't, I will get a note of breach on my file & Dean will be notified. https://t.co/t5xCBsTzK2

Shepherd confirmed to The Fix that the intellectual-property claim and demand for removal came from Nicholson, her “supervising professor.”

The professor made the demand at a “meeting with my fellow six” teaching assistants, in which Nicholson told Shepherd “something along the lines of: ‘Lindsay, I don’t do the whole social media thing, but I heard you posted my syllabus on your Twitter.’”

When Nicholson claimed she violated her copyright and the campus code and ordered her to delete the tweet, “I, politely, objected to this suggestion.”

That’s when Nicholson threatened to “get a note of breach of non-academic code of conduct on my file and the Dean of Graduate and Postdoctoral Studies would be notified,” Shepherd told The Fix.

She believes she was targeted for publicly mocking Nicholson’s choice of language in her syllabus.

“If I were praising the land acknowledgments, they likely wouldn’t care … however, because I critiqued them, the faculty wants the tweet gone, citing ‘code of conduct,’” she told The Fix.

Nicholson did not respond to inquiries from The Fix regarding Shepherd’s allegations and her interpretation of the non-academic student code of conduct, which was last reviewed in 2015.

Yet another meeting about Shepherd?

Shepherd also mused whether the administration would use her alleged infringement “as grounds for expulsion,” even though the land acknowledgment on the syllabus is from the LSPIRG website, not Nicholson’s “original” creation.

The next morning, Shepherd tweeted that her dean, Richard Nemesvari, emailed to say the cropped image from the syllabus is “NOT the intellectual property of the instructor, and there is NO breach in copyright or non-academic code of conduct.”

“Communication Studies faculty keeps making up their own rules! Hilarious!” she continued.

Just received an email from the Dean that the cut-out from the syllabus is NOT the intellectual property of the instructor, and there is NO breach in copyright or non-academic code of conduct.

Specifically, Nemesvari told her it was “incorrect” that the land-acknowledgment statement “for the CS101 syllabus is the intellectual property of the faculty,” Shepherd told The Fix. 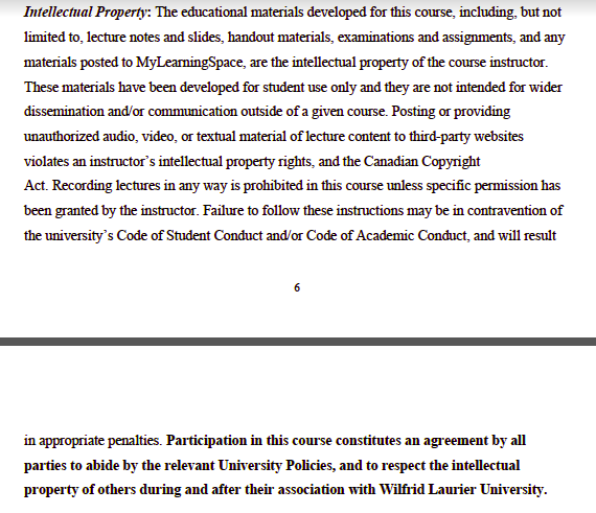 Kevin Crowley, university director of communications and public affairs, confirmed to The Fix in an email that the “Dean of the Arts reached out to Lindsay to assure her that she has not breached copyright.”

While she escaped punishment this time, Shepherd’s relief may be short-lived.

She told The Fix she’d just been informed of Nemesvari calling a meeting for “Communication Studies and Cultural Analysis & Social Theory Faculty (the two faculties I am associated with).” She didn’t say whether the purpose of the meeting had been given.