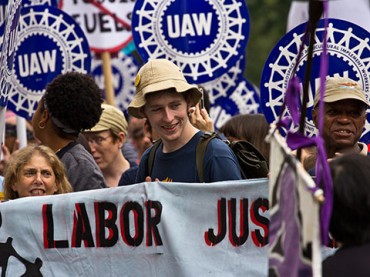 The University of California’s student-worker union is taking on the Teamsters by attacking companies that do business with Israel, pitting academics against blue-collar workers.

A group within UAW 2865, which represents mostly graduate students, is also accusing the leadership of violating their contracts with the divestment resolution.

The boycott, divestment and sanctions (BDS) resolution drew support from nearly two-thirds of UAW 2865 members who voted Dec. 4. It calls on both the university system and UAW 2865 parent United Auto Workers to divest from companies doing business with Israel – the first major U.S. labor union to favor BDS.

Though the union represents more than 13,000 “teaching assistants, tutors, and other student-workers” in the UC system, the vote tally was only 1,411 to 749, according to Minding The Campus.

The resolution serves as an academic boycott that would limit “academic freedom” and serve to stigmatize students researching Israel, a spokesperson for Informed Grads, a group of UAW 2865 members opposing the resolution, told The College Fix in an email.

Additionally, the group warned that it could violate their contracts. “The resolution passed by the leaders in July opened with text urging members to teach the BDS political position in classrooms, which violates Article 18 of our contract (that what is taught is at the sole discretion of the university).”

Hinting at BDS teaching in the classroom

While the resolution that passed does not urge members to promote BDS in the classrooms, the group’s spokesperson said that immediately after the vote, UAW 2865 leaders emailed members hinting at more steps to come.

“We invite you to think of creative ways to translate our union’s support for the Palestinian struggle into concrete action,” the leaders wrote, according to the Informed Grads spokesman. Informed Grads interpreted this as an attempt to revert to the original resolution.

The vote “weakens our union by targeting fellow UAW workers and putting us at odds with the explicitly stated positions of major unions across the country,” the spokesman said.

Informed Grads accused UAW 2865 of an “unfair” vote a week later, saying that BDS opponents “were denied equal opportunities to reach members” because their views, events and written arguments “were not published or publicized by the local union in anything other than a token manner.

“The Union wrote and disseminated thousands of words in favor of BDS,” Informed Grads said in its press release. “The Union refused to send members a single paragraph from the opposition.” It has filed appeals “contesting the fairness of the elections,” it said.

The California Teamsters, which represents 14,000 UC system workers, excoriated UAW 2865 for the BDS resolution in November.

“Whatever your motives, we cannot conceive of an action more hostile to the interests of our members,” the union wrote to UAW 2865, saving its harshest words for the end: “Unlike the members of your union … our members are working in jobs that must support them for a lifetime.”

Going higher up the leadership ladder, the head of UAW Region 5, which includes California, reminded UAW 2865 in a letter dated Nov. 17 that “the International Union’s previous position has not changed” since 2007.

The UAW International said in that resolution: “Calls for academic boycotts of Israel are inimical to and counter to the principles of academic freedom and freedom of association, key principles for which academics and educational unions have struggled over many years.”

‘Very easy … to make this problem go away’

Katie Fox-Hodess, a spokesperson for UAW 2865, told The Fix in a phone interview that the divestment vote is important because it allows the members to “take a stand in support of Palestinian human rights.”

She said the idea for a vote on the issue first came up during the summer, after Israeli attacks on Gaza.

Asked about labor opposition to the resolution from within and without UAW 2865, Fox-Hodess said the members believed “as organized workers, we have a responsibility to stand with workers” everywhere. She added that the call for divestment came from Palestinian trade unions, and is optimistic that other labor unions will eventually support divestment.

“It’s very easy for these [targeted] companies to make this problem go away,” she said: They only have to stop working with Israel to “violate human rights.”

The UC system said in 2010 it would not divest from Israel.