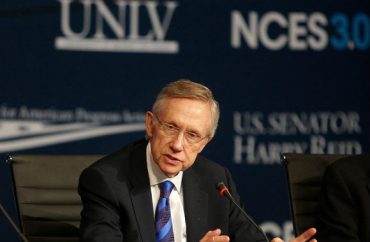 Virtue signaling against a student newspaper

Outgoing Senate Majority Leader Harry Reid of Nevada leaves a mixed legacy. He enabled the attrition of Democrats in the Senate, but he may have victory of a different sort: killing independent journalism at the University of Nevada-Las Vegas.

Pressure by Reid to dump its longtime mascot Hey Reb because it’s allegedly pro-Confederate, the university also decided to starve its similarly named independent student newspaper, The Rebel Yell, unless it “immediately” changed its name, reports The Nevada Sagebrush at UN-Reno.

The fight over The Rebel Yell precedes its name.

The paper separated itself from the student government in 2012 after the student body president tried to assert control over the editor-in-chief position. It gave up the 8 percent of student fees that had helped fund it, the paper says on its GoFundMe donation page:

We … significantly downsized to adapt to the new budget that entailed, which has already made it difficult to produce a quality product. Downsizing even further is not an option. We have been applying for funding from the Student Life Funding Committee each year since then.

The money from this committee is not guaranteed, and for this fiscal year there was only enough in its budget to keep The Rebel Yell afloat for Fall 2016.

We are the ONLY source of 100 percent independent, student-produced news at UNLV, meaning we do not subscribe to editorial advice or demands from any authority. We go beyond just promoting the university; we tell the UNLV community what it needs to know.

Its long-term proposal for staying afloat is a new $2 per semester student fee, but that wouldn’t take effect until the next academic year.

Here’s where Reid’s denunciation of the mascot and UNLV’s virtue signaling became a life-or-death issue for The Rebel Yell, which had already agreed to change its name, the Sagebrush reports:

The “rebel yell” was a battle cry used by Confederate soldiers during the American Civil War and is often thought of as a racist title. Despite some resistance from alumni of the paper [to changing its name, Editor-in-Chief Bianca] Cseke said the staff and the advisory board is looking forward to re-launching their paper.

Steve Sebelius, the chairman of the newspaper’s advisory board said university officials wouldn’t help the paper seek outside funding unless its name was changed immediately.

Changing the name “immediately” would mean ignoring student input on what the new name should be. The paper had planned to announce a new student-informed name in the final issue of the semester Nov. 28.

As Cseke notes, the new name won’t matter if the paper starves to death.

All because Harry Reid and UNLV decided that showing their righteousness was more important than holding administrators and student leaders accountable through an independent press.

There’s no word whether Reid and UNLV have a problem with Billy Idol’s ’80s hit song “Rebel Yell.”

Read the Sagebrush story and check out the GoFundMe campaign by The Rebel Yell, which stands at $1,600 as of Monday.