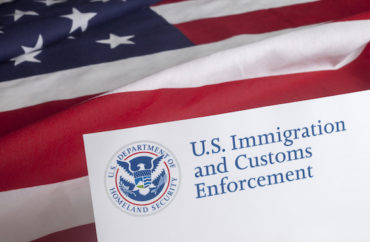 Activists at Harvard University are slamming the school’s student newspaper for reaching out to a federal immigration agency for comment on a campus controversy. That agency, meanwhile, is disputing claims that it would target members of the activist group due to the protest.

A petition circulated by the group Act on a Dream at Harvard College, noting a recent protest sponsored by that group that called for the abolition of the Immigration and Customs Enforcement department, sharply criticized The Harvard Crimson for “contact[ing] ICE for a request for comment on the protest.” Claiming that doing so “endangers undocumented students on campus,” the activists said that reaching out to the agency is the equivalent to “tipping them off.”

“This was the wrong call. We are extremely disappointed in the cultural insensitivity displayed by The Crimson’s policy to reach out to ICE, a government agency with a long history of surveilling and retaliating against those who speak out against them,” the petition reads:

We strongly condemn their decision to uphold a policy that blatantly endangers undocumented students on our campus. The Crimson, as a student-run publication, has a responsibility to prioritize the safety of the student body they are reporting on — they must reexamine and interrogate policies that place students under threat. Responsible journalism includes being conscious about the impact caused by their actions as a news organization.

Through their petition, the activists demand that The Crimson apologize, “change their policies that require calling ICE for comment,” and announce support for illegal immigrant students on Harvard’s campus. Over 650 signatures were attached to the petition on Wednesday morning.

Reached for comment via email Wednesday morning, Immigration and Customs Enforcement spokesman Bryan Cox told The Fix that the agency “respects the rights of all persons to peacefully express their opinions” while still “remain[ing] committed to enforcing federal law as passed by Congress.”

“Claims that ICE targets persons for arrest due to peaceful protest are false, and individuals responsible for this false claim do a disservice to the communities they claim to represent by needlessly spreading fear through misinformation,” Cox wrote.

“Should the Harvard community wish to have a fact-based discussion as to what ICE does and does not do we would be happy to take part in that conversation. We routinely do so across the country and would be happy to discuss doing the same there should the Harvard community have interest in professional, factual public debate beyond the activist group misinformation,” he added.

In a joint response to the activist group’s petition published Tuesday, the president and the managing editor of The Crimson both defended the paper’s seeking comment from the federal agency, writing that the publication had followed a “commonly accepted set of journalistic standards.”

The petition noted that, during a meeting between the activists and The Crimson, the paper’s staff “stood by their decision to call ICE and stated that they would do so again.”

Read the petition here, and The Crimson‘s response here.