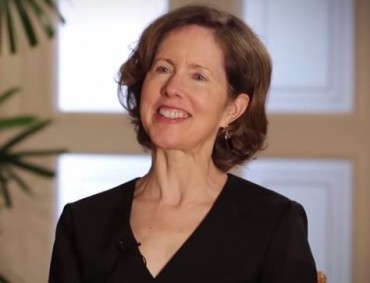 Well-known author and scholar Heather Mac Donald recently visited UCLA to talk about the idea of “microaggressions” on college campuses, but before she even went there, she had a few words to say about the people running the place.

The launch of her talk Thursday began with outlining the proliferation of the “massive diversity bureaucracy” at universities in general and UCLA in particular. She called out UCLA’s brand new Vice Chancellor for Equity and Diversity position by mentioning his salary alone could “pay…for 12 under privileged college students” to attend UCLA. She also chided UCLA Chancellor Gene Block for “selling out his faculty” and believing “that faculty need constant monitoring by a phalanx of chancellorettes and deanlettes.”

She went on to say university administrators have cast the diversity issue as an “epidemiological miasma,” because they never mention the exact perpetrators but allege that it is everywhere.

And she was just getting warmed up.

Mac Donald, a self-proclaimed “secular conservative” who is well known for her articulation of conservative views on crime, proceeded to describe a litany of academic horrors at the public campus.

First, she recalled an incident in the UCLA Education school where professor emeritus Val Dean Rust was subject to protests because of alleged microaggressions in his editing of student papers a few years ago.

Mac Donald called the result of the situation – in which Rust was forced to stay away from UCLA for six months and the student protester who led the cause was praised – as a “travesty of justice typical of this reign of terror.”

She mentioned that she herself interviewed many of Rust’s former students, and all of them had nothing but praise for the retired professor, who was well known for only wanting the best for his students. Her final verdict on the situation was that “UCLA grovels to protesters.”

She also cited a viral video that attacked UCLA for grievances against black students. Mac Donald said the way the university responded to the video, which was public praise, defies the true narrative of the situation.

The video implies that current black students are as equally oppressed as black students on campus in 1969. But Mac Donald highlighted that although only 3.8 percent of the university is black, only “5 percent of UCLA applicants are black” and only 7 percent of California is black. She said interviews with Professor Richard Sander and Professor Tim Groseclose, UCLA whistleblowers on affirmative action, have revealed to her that “UCLA twists itself into knots to admit blacks.” She went even further by claiming that the “UCLA Law school admits blacks at 400 times what their proficiency would predict.”

In the closing moments of her lecture, Mac Donald implored students to reject what she calls a “cult of victimhood.” She encouraged students instead “get revenge by acing your chemistry exam.”

During the question and answers portion, Mac Donald fielded questions on a variety of topics, including the “campus rape epidemic.”

She questioned the validity of the rape epidemic, postulating that if such an epidemic existed at elite universities, then there would be a strong movement for single sex schools, but instead there is a push for coed bathrooms. In an additional remark, she said that the idea that women are only victims at universities “makes her want to throw up.” She cited the larger number of women at universities and the “frenzy to find qualified women and minorities” for professorships as evidence against such an idea.

The event drew attendance from both students and outside community members, and was organized by Bruin Republicans as part of their “Lectures on Conservative Thought” series. There were no protests of the talk.

College Fix contributor Jacob Kohlhepp is a student at UCLA and vice president of the Bruin Republicans.