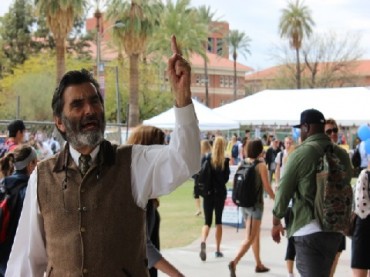 TUCSON, ARIZ. – University of Arizona recently became the venue for an ecclesiastical showdown with spirited – and sometimes comical – dueling demonstrations between nationally known hellfire preachers, a grace-based pastor, and some students.

Student protesters also held aloft signs that read “free hugs from a trollop” or “Satan loves rock and roll,” and openly mocked the preachers while they were in the midst of a sermon. Members of the ministry are known for their hellfire and damnation style of preaching, including shouting at students and wildly gesticulating, which the ministry attributes to Proverbs 27:5, stating on its website that: “Open rebuke is better than secret love.”

Smock said in an interview with The College Fix that he aims to “command students to repent” and cause them to experience a “change of mind, put their trust in Jesus Christ.”

The ministry targets college students because “they are the leaders of tomorrow, people of influence,” making them “key people to reach,” said Sister Cindy, Smock’s wife of 30 years.

Smock preached along with his wife and University of Arizona student Brother Dean Saxton, the ministry’s permanent presence on campus who preaches to students on a regular basis.

Saxton, a senior majoring in religious studies at the university, told The College Fix that he became involved with the ministry after hearing Smock preach on campus during his sophomore year. Before then, Saxton said he was just “a typical Christian,” but after hearing what the minister had to say, he was “converted” and decided to “take it to the next level.”

Saxton has since developed campus notoriety by shouting at students as they head to class. He also holds confrontational signs, such as: “Sorority girls are whores.” However, Saxton said he isn’t worried about the infamy because “everybody hates everybody for their beliefs.” As for last week’s spectacle, many students said Saxton’s and Smock’s method of preaching was offensive and hate-filled. With that, an assembly of students gathered around the preaching every day to protest the speeches.

Marlon Joyner, a student who stopped to hear Smock’s preaching on his way to class, said that he believes that Smock “doesn’t know much about Christianity” and that he had “resorted to cheap theater.”

Some students said they viewed Smock’s work as a deterrent from Christianity.

“People like [Smock] is the reason why I’m agnostic,” said freshman Mariah Simons, a nutrition major.

Alex Moore, a junior studying wildlife management, attributes Smock’s strong prejudices to the fact that “people are so insecure and uncomfortable in their place in society that they have to force it down the throats of others.”

To protest Smock and his ministry, students made posters advocating the behaviors the ministry was speaking against. Smock’s presence on campus was also turned into a game by the university’s Secular Student Alliance, who satirized Smock’s sermons by creating “Brother Jed Bingo” out of catch phrases or common topics he frequents during his preaching.

According to Brianna Hernondon, a sophomore studying anthropology, the club saw it as an opportunity to “raise awareness” for the one secular club on campus among the university’s many Christian organizations. Whenever a participant had crossed off five in a row, they earned a prize of candy.

However, students were not the only people to turn out to protest Smock and his ministry.

Ron Underwood, another open-air preacher and founder of Street Grace Ministries, traveled to the university to share a more positive message with the students.

Underwood said he sought to tell the students that “God loves them,” and he hoped to counteract the “false message” spread by Smock and his ministry.

On his website, Underwood called Campus Ministries USA “a cult of personality” and said that their “message is one of utter contempt and hatred toward their fellow man.”

Underwood said he believes Smock and his followers to be misguided in their actions, citing John 3:17.

Smock’s and Saxton’s actions break Underwood’s heart because, he said, “Jesus never spoke to a lost sinner the way Jed and Dean do.”

“They have no right to do that,” Underwood said. “It makes me angry.”