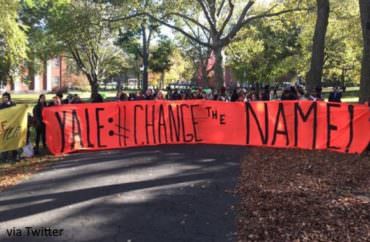 An Asian-American sportscaster, Robert Lee, was recently reassigned from calling a University of Virginia football game because his name mirrored Robert E. Lee, the Confederate general.

That’s “not unreasonable in today’s America,” according to ESPN brass.

In Oregon, three elementary schools with the name “Lynch” have been renamed. The schools were named after the family that donated the land for the campuses years ago, but today’s superintendent said Lynch is too closely associated with “America’s violent racial history.”

Last fall, the San Francisco Board of Education President Matt Haney posed the notion of renaming George Washington High School, saying at the time “I don’t think the goal is to condemn people who died a long time ago. The question is whether there might be a more appropriate, meaningful name.”

These three stories highlight a larger trend sweeping the nation — any reminder of racism, the Civil War, slavery or similar themes must be erased, say a growing chorus of aggrieved Americans. Protesters and others actively demand statues and other vestiges of America’s controversial past be hidden away — on campus and in the town square.

Given that names have also been targeted, The College Fix wonders if and when protests will turn against colleges named after or founded by people who owned slaves? Consider these:

Washington and Lee University
A small liberal arts college located in Lexington, Va., Washington and Lee is named for two American generals: one who fought to establish the United States in the Revolutionary War, and another who fought to divide it in the Civil War. While George Washington remains one of the most revered figures in our nation’s history, Robert E. Lee’s Confederate legacy has been under heavy fire recently. A statue in his honor at Charlottesville was the driving force behind a recent race riot there.

Duke University
This university, established in 1838, was renamed in the early 20th century for the Duke family, which had members of varying political and racial views. Washington Duke, a 19th century tobacco magnate, was financially responsible for relocating what was then Trinity College to Durham, North Carolina, where what is now Duke University resides. Washington Duke owned a small number of slaves, fought for the Confederacy, and was imprisoned by the Union. His son, James Buchanan Duke, established an endowment in 1924 to rename the school in honor of his father.

Rice University
William Marsh Rice, the namesake of Rice University in Houston, Texas, was an American business tycoon of the 19th century who owned, in addition to a number of companies and hotels, fifteen slaves. Rice died in 1900; in his will, in which he left his fortune to found a new university, he specifically instructed that his university be “whites only.”

Clemson University
Thomas Green Clemson was a slave-owning South Carolina politician who ordered in his will that his estate be used to found a new school. Originally an agricultural college, Clemson is now a fully-fledged research university — albeit one with a controversial founder. Thomas Clemson served in the Confederate army, and previously had close political and familial ties with John C. Calhoun, one of the most notorious defenders of slavery in antebellum America. They were political allies, and Clemson was married to Calhoun’s daughter. Clemson was also a cohort of future South Carolina Governor Benjamin Tillman, an open racist who boasted of personally murdering African-Americans. Tillman was influential in the both the university’s founding and creating its working relationship with the state of South Carolina.

Calhoun Community College
This community college is named for John C. Calhoun, influential senator of the early years of the United States, and one of the most historically prominent defenders of slavery. Calhoun is located in Decatur, Alabama.

Yale University
Yale has been the subject of controversy in recent months for the name of one of its residential colleges, Calhoun College (again, named for John C. Calhoun, who was the valedictorian of Yale’s class of 1804). But Yale’s actual namesake is no better. Elihu Yale, a British merchant, was a longtime benefactor of the school, resulting in a renaming of the school to Yale University in 1718. He was also a prolific slave trader who ordered that every ship of his, no matter what its cargo, also carry slaves.

Princeton University
The nation’s premier Ivy League, Princeton has struggled to reconcile with the history of its thirteenth president, Woodrow Wilson, also the twenty-eighth president of the United States. While president of the school, Wilson discouraged blacks from applying. Later, in the United States government, he promoted segregationist policies, appointed many openly racist cabinet members, and sympathized with the Klu Klux Klan. Princeton’s renowned Woodrow Wilson School of Public and International Affairs is named for him.

University of Virginia
UVA was founded by Thomas Jefferson in 1819, one of America’s oldest places of higher education. But located in Charlottesville, it has been plagued in recent memory by violent racially fueled riots, and even further back, by its association with Jefferson. Jefferson, though considered one of the greatest U.S. presidents and himself an advocate for legislatively restricting and fighting slavery in his new country, did own hundreds of slaves on his Virginia plantation.

Sam Houston State University
Situated in Houston, Texas, this university is named for American politician, frontiersman, and folk hero Sam Houston. Houston was remembered for helping bring Texas into the Union, and later served as its governor. He and his family were slaveowners, and he opposed abolition. Houston did resist the expansion of slavery to new territories, however, and was no Confederate sympathizer — after Texas’s secession from the Union, he resigned as governor in protest.

Is it far-fetched to think college names are next on the chopping block? Consider this article from the highly popular African-American news website The Grio:

What does it say about a country that still names its schools after those who kidnapped black people and chained them right in their backyard? … If it is that unpleasant, then change it. There is no reason why there are nearly 200 schools across the nation named after Confederate leaders. Paying homage to white supremacists, immortalizing them almost as if to erect monuments in their name, makes no sense and is indefensible.

If we condemn these people for their role in slavery and the oppression of black folks, then what exactly are we saying when we keep their names on the building anyway? And if we excuse their deplorable legacy because they reflected the times in which they lived, what does that have to do with us today?