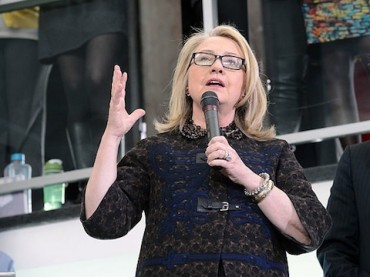 Hillary Clinton gave a Luskin Thought Leadership lecture at UCLA last March for which she raked in $300,000 in speaking fees. The appearance was one of at least eight lectures she gave at various universities throughout the past year. Her minimum speaking fee at said universities was reportedly $200,000.

There has been outrage among some students of these universities, who lambaste their administrators for doling out stratospheric speaking fees while students are left to grapple with tuitions that have increased by 500 percent over the last thirty years.

In defense of Clinton’s exploits, it’s been noted that the fees she was paid did not come out of the pot of money funded by tuition but rather from privately donated grants. For instance, at UCLA, the Luskin Lecture for Thought Leadership fund established in 2011 by benefactors Meyer and Renee Luskin paid her fee.

The nascent Luskin Lecture for Thought Leadership program has thus far brought in three speakers: Bill Clinton, Hillary Clinton, and Kofi Annan, all of whom are, incidentally (or not?), of the liberal bent.

It is correct to point out that, because she was paid by a private donation, it is not as if her speaking fee directly diminished the school’s ability to pay for classroom resources and the like.

But I have always thought the excuse by university administrators that building the new conference center, or the new campus restaurant, or the new LGBT center is justified because various private donors have earmarked their donations for these express purposes, is rather dubious.

In an age when students are crushed by debt, it is conceivable that administrators with any concern for their students could tell potential benefactors that they would love to accept their donation for the new Muslim Cultural Center, but that because of the dire straits their students find themselves in vis-à-vis tuition costs, they would kindly ask that donors make their donations to the university’s general fund instead.

Notwithstanding administrators’ cowardice, the speaking fees did come from private donations. Therefore students’ outrage seems to be out of proportion if you look at the situation through the lens of the alleged opportunity cost borne by paying Hillary with money that, whatever students believed, could not have gone directly to students anyway.

However, if one looks at the situation through a populist lens, it makes more sense. $300,000 is an obscene amount of money to pay someone to speak his or her mind for an hour. No one on God’s green earth should command such a speaking fee, save, perhaps, God’s own son—were he to return to earth and begin a speaking tour.

Though many students were enamored with the idea of Hillary speaking at their own campus, many were decidedly not, and the country at large seems to be very weary of dynastic political families who use their political clout to command one-time speaking fees that exceed the median net worth of at least 80 percent of American families.

Obama attempted to make wealth inequality the defining issue of his second term, and although his attempt has largely floundered, there is considerable traction in America for the idea that being ultra-wealthy is a bad thing.

Sensing this populist milieu, Clinton has gone to painstaking lengths to convince the American people that she is not the big bad fat cat everyone thinks she is.

She started out by claiming, incredulously, that her and her husband were “dead broke” emerging from the Oval Office. Then she deflected criticism by noting that her and Bill are not “truly well off” like some other people are, “not to name names” (Mitt Romney?), she said. And she put forth that the Clintons’ wealth was actually of the noble sort because they accumulated it “through dint of hard work.”

If Americans cannot appreciate that speaking on one’s own opinions for an hour is back-breaking hard work, than I don’t know what will.

Speaking of appreciating hard work, a particularly pernicious pathology in modern American society is the ill regard in which many ordinary Americans hold wealthy people and wealth creation in general.

It is this public feeling that has the president speaking of wealth inequality and has two potential 2016 democratic candidates, Hillary Clinton and Joe Biden, playing a competitive game of “who’s poorer.”

It is this public feeling that has occasioned considerable support for the Buffet Rule, has doomed candidate Romney on the grounds that his being rich made him out of touch, and has laid the groundwork for the recent passing of a $15 minimum wage in Seattle.

Biden recently tapped into this feeling by boasting, “I don’t own a single stock or bond” and “I have no savings accounts.” His tone suggested he is very proud of these two facts.

Since when in this country is the Vice President of the United States not having a savings account celebrated, let alone tolerated?

I’m aware of the idea that many voters like to back candidates who they’d “have a beer with,” but that should pertain more to the candidate’s personality than his personal balance sheet, which are, by the way, not correlated in any way.

There is a palpable declining respect for wealth creation in the United States.

Only someone who does not appreciate wealth creation and did not come by her earnings by the sweat of her own brow would try to disown her own wealth.

Thus we have Hillary, who made her wealth in part by accepting outrageous speaking fees from like-minded, preening college administrators, and Joe Biden, who made his wealth by being married to the esteemed Dr. Jill Biden, both disavowing their own stellar balance sheets because they have no idea what it means to do a hard day’s work. (It should be noted Clinton responded to the uproar about her campus fees by saying she donated them to her personal Clinton Foundation.)

The American suspicion of wealthy people is so pervasive that even Fox News got in on the wealth bashing during the 2012 campaign.

Fox News host Megyn Kelly suggested to Romney that his wealth automatically makes him out of touch, to which he replied: “I’ve made a lot of money. I’ve been very successful. I’m not going to apologize for that.”

Spoken like someone who truly understands what it means to create wealth, and also, consequently, what it means to be frugal and to act with great forethought, two traits that I would rather like to see in a president.

We may impugn our college administrators’ motives in deciding to pay Clinton the equivalent of the down payment on a $1.5 million house instead of insisting on spending that money on paying adjunct lecturers more. We may question whether their judgment is sound in paying one person so much to speak for an hour.

However, we should not continue to look down upon wealth creation and financial success in general, for if we do, before long, America will look very different from what we’re used to.