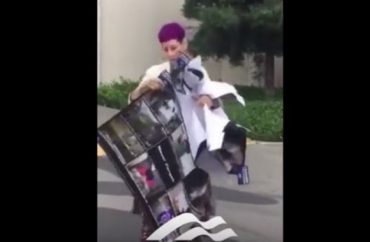 The students, who attend Saddleback College and are members of the Young Americans for Freedom group, filmed on Thursday history Professor Margot Lovett tear down posters with images showing various terrorists acts and the words “Never Forget.”

Lovett, chair of the history department, told the students they did not have permission to hang them, the video shows.

The actions of Lovett, who in 2001 endorsed a statement blaming U.S. imperialism for the 9/11 attacks, came after campus leaders used bureaucratic red tape to try to shut down the conservative students’ previously approved Sept. 11 memorial.

Kyle Chiu, a 21-year-old junior and the Young Americans for Freedom chapter’s vice chair, told The College Fix campus leaders refused to grant their club active status because officials want to change some parts of the group’s bylaws. With that, he said, a previously approved 9/11 memorial slated for Sept. 8 was canceled.

“The funny thing is that these are the exact same documents we submitted last year with no problem at all,” Chiu said. “This technically keeps us from active status, thus giving the Student Development Office what they feel is justification for canceling our event. An event the same office approved a couple weeks before.”

“Due to the cancellation of the 9/11 Never Forget Project, all of the reservations for equipment, space on campus, as well as official notifications to campus groups were forfeited,” he added. Undeterred, the students went ahead on Thursday to mark the anniversary of the terrorist attacks. As they placed American flags in the ground for each person killed on Sept. 11, Lovett came by and tore down their posters. (Poster image, YAF)

Saddleback officials did not respond to repeated phone calls and emails Wednesday and Thursday from The College Fix seeking comment. Lovett also could not be reached for comment.

Chiu said despite Lovett tearing down their posters, they inserted all their flags in the ground to mark the anniversary, and the flags remained up all day.

Ultimately, he said, he is disappointed by his school leaders.

“I honestly felt like Saddleback was better than this. I am very disappointed that we cannot come together as a higher learning establishment to remember the lives that were lost on 9/11,” Chiu said. “It breaks my heart to see such petty reasoning as to why we can’t honor fallen Americans.”

Editor’s note: On Friday, after the article was published, Saddleback College officials released a statement on the matter:

Saddleback College supports student clubs and their right to organize and exercise their freedom of speech. At the beginning of each academic year, in order to organize meetings and hold events, student clubs must go through an activation process that includes an orientation, the establishment of a club constitution and by-laws, and the appointment of a faculty adviser.

Young Americans for Freedom contacted the college’s student development office before fall semester classes began to state their intention to plan an event commemorating 9/11. The director made clear that the students would have to complete the club activation process before the event could be approved. As of today the students have not completed the requirements to form a club.

On September 8th, the students posted stickers and flyers on several campus buildings, which is a violation of South Orange County Community College District policy. The students also did this without first seeking approval from college administration. However, flyers that were posted by the students in the free speech areas on campus have not been removed by college personnel.

The director of student life has reached out to the students and invited them to meet and discuss the steps that can be taken to work collaboratively with the college in the future and in accordance with college and district policies and procedures.