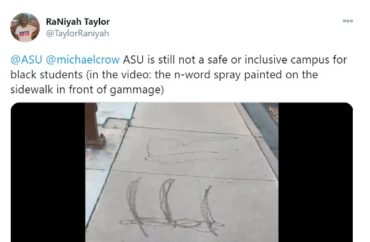 Black student activists at Arizona State University said an investigation into racist graffiti has been resolved, but won’t share any further details.

“Yes, the matter has been resolved,” Aniyah Braveboy told The College Fix via email in response to a question about the status of an investigation stemming from an October 23 incident. A black student, RaNiyah Taylor, found the “N-word” written outside the Grammage Auditorium and posted the video on Twitter.

@ASU @michaelcrow ASU is still not a safe or inclusive campus for black students (in the video: the n-word spray painted on the sidewalk in front of gammage) pic.twitter.com/qQjyLfUnm1

“ASU is still not a safe or inclusive campus for black students,” Taylor said, tagging the university Twitter account and Michael Crow, the school’s president. Taylor did not respond to a Facebook message Friday morning from The Fix asking for an update and if the university has been in contact with her.

Now a month later, the status of the follow-up into the graffiti remains murky.

While the Black African Coalition said the matter has been resolved, the university said it still is looking into the issue.

“This case is still open and under investigation,” Adam Wolfe, the university’s police department spokesperson, said on November 23. “There are no leads at this time as it was an isolated incident with no witnesses.”

Wolfe reiterated that he did not “have any new information at this time,” in a follow-up email on December 1.

Braveboy did not respond to a follow-up email on December 1 seeking clarification on if there had been any arrests or anyone charged for the vandalism incident. The Fix also asked her for clarification on what she meant by her previous statement that the issue was resolved.

The Fix reached out again via email to Braveboy on December 4 asking to clarify why the university’s account and her account appear to be in contradiction, but did not receive a response.

She also did not respond to a request to explain what she meant by her statement about not being able to share information on who the perpetrator could be.

The Fix asked the Black African Coalition leader to explain if she meant that she knew who the perpetrator was but could not provide the name or if she did not know and did not want to speculate.

Arizona State media officials did not directly answer a question about if the university had reached an agreement with the student group to not discuss the graffiti incident or to explain the differing accounts of the status of the investigation.

“I can’t speak for the student [Aniyah Braveboy] you all reached out to or what she meant,” spokesperson Jerry Gonzalez told The Fix via email on Friday. “That’s up to you all to clarify with her. She should be able to speak, if she wants to.”

“Maybe what the student is referring to is that this has been resolved because the group was satisfied with the response from the university, as far as strongly and publicly condemning the graffiti and any other such activities,” Gonzalez said in a follow-up email.

He confirmed Wolfe’s statements that the investigation is still ongoing.