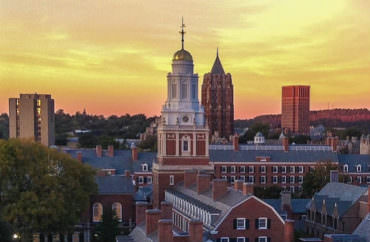 The following excerpt is adapted from “The Assault on American Excellence,” a recently published book by Anthony Kronman, the former dean of Yale Law School.

In the late summer of 2015, the Yale Daily News carried a story that caught my attention.

Yale undergraduates live in residential units called “colleges.” The story reported that the “master” of one of these had decided to change his title on account of what he judged to be its offensive connotations. Some students had complained that it reminded them of the plantation culture of the Old South. The master of Pierson College sympathized with their complaints. He said he understood why black students in particular might be sensitive to the use of the term 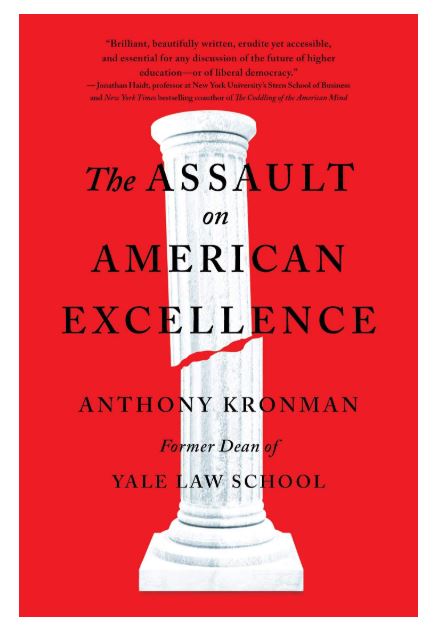 and that he wanted them to feel equally welcome at Yale, whose traditions retained many of the cultural trappings of the almost exclusively white, Anglo, male school that it had been for nearly all of its first three hundred years. To avoid even the possibility of giving offense to those who might associate his title with the racism and hierarchy of the antebellum South, the master of Pierson announced that in the future he would refer to himself not as a master but by some more neutral term instead…

The Pierson master who gave up his title could not possibly have thought that he might be confused with the owner of a Mississippi plantation. What really disturbed him, and his students, was not race but rank. It was the aristocratic implication, however slight, that men and women can be distinguished according to their success not in this or that particular endeavor—the study of computer science, for example, or Greek philosophy—but in the all-inclusive work of being human. This idea has been accepted by many cultures of the most varied sorts. It has been joined with other beliefs, some pernicious and others benign. But at the most basic level, it runs against the grain of America’s democratic civilization. It seems—it is—antidemocratic. Any institution that embraces the idea of aristocracy, even in the most modest and qualified terms, therefore puts itself at odds with our civilization as a whole.

Yet even—indeed especially—in our democracy it is essential to preserve a few islands of aristocratic spirit, both for their own sake, because of the rarity and beauty of what they protect, and for the good of the larger democratic culture as well. That is because a democracy is strengthened by the habit of independent-mindedness that, at their very best, these institutions value and promote. None play a more important role in this regard than our colleges and universities. An attack on the idea of aristocracy within them harms not only the few who live and work in the privileged space they afford, but all who, in Edward Gibbon’s phrase, “enjoy and abuse” the democratic privileges that belong to everyone outside their walls.

Alexis de Tocqueville developed this line of thought with a clarity that has never been matched. I take my point of departure from his classic account.

Tocqueville found much to admire in America’s democratic civilization. He thought it the most just the world has ever known. He applauded its embrace of the idea that all human beings should have an equal say in their choice of governors and equal rights before the law. But he also believed that American democracy has a pathological side. It tends, he said, to depreciate what is noble and rare and to encourage a uniformity of opinion despite its professed devotion to the independence of the individual. Tocqueville was an aristocrat. He embraced the idea of a rank order of human greatness. He nevertheless appreciated, with a clear and steady eye, the shortcomings of the older aristocratic regimes of feudal Europe and applauded, with cautious enthusiasm, the virtues of America’s young democracy and its promise of universal equality. But he thought it essential to the long-term well-being of our democracy that a few pockets of aristocratic sentiment be preserved as a bulwark against its leveling egalitarianism and its encouragement of what he called the “tyranny of the majority” in the realm of belief and opinion. 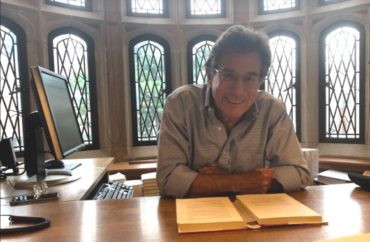 Among the institutions that Tocqueville identifies as potential counterweights of this kind, he mentions our colleges and universities. These have never been entirely aristocratic in Tocqueville’s sense. They have always had a democratic side as well. And their acceptance of the aristocratic ideal of an order of moral, spiritual, and cultural excellence has at every step been contaminated by the confusion of this order with the very different one of wealth and social privilege. It has been weakened and sometimes corrupted by the exclusionary prejudices that kept women, Jews, and blacks out and the untalented children of alumni in. Yet, at their best, our colleges and universities have resisted the demand to make themselves over in the image of the democratic values of the culture as a whole. Even while striving to make the process of admission more open and fair, they have held to the idea that part of the work of our most distinguished institutions of higher learning is to preserve, transmit, and honor an aristocratic tradition of respect for human greatness.

This is important for two reasons. The first is the preservation of a cultured appreciation of excellence in human living, as distinct from vocational success. The latter produces inequalities of wealth, status, and power. But it is consistent with the democratic belief that no one’s humanity is greater than anyone else’s. This is true if we are talking about political and legal rights. It is false if we assume that the universal powers of enjoyment, expression, and judgment that all human beings possess are more developed in some souls than others—that in some they are particularly subtle and refined, especially when it comes to the most intellectually, aesthetically, and spiritually demanding exertions. This is an aristocratic assumption. In a democracy like ours, it is in constant danger of being derided or dismissed. But if it is, we lose something of value. Without the idea of greatness of soul, human life becomes smaller and flatter. It becomes both less noble and less tragic. Protecting this idea from democratic diminution is the first reason our colleges and universities need to nurture the aristocratic love of what is brilliant and fine.

The second is that this love itself contributes to the strength and stability of our democratic way of life.

Every adult in our country gets to vote. Each has the right to decide for him- or herself which candidates and policies are best. But the forces of conformity are great. The principle of universal equality, and its corollary the principle of individual self-rule, in fact make these forces stronger. The freedom to make up one’s own mind is a large responsibility. Many ease the burden by embracing the opinions of others with little or no independent reflection. The result is a kind of groupthink, partly the result of ignorance and partly of fear. This makes it easier for would-be tyrants to manipulate the democratic masses and eventually deprive them of their freedom. Tocqueville’s greatest concern for the future of America was that conformity of thought would ease the way to despotism.

There are many counterweights to this, of course. Tocqueville puts special emphasis on the role of a free press. An education in human greatness contributes to democratic life as well. To some this will seem paradoxical. How can the cultivation of a spirit of aristocratic connoisseurship make our democracy stronger? The answer is by developing the habit of judging people and events from a point of view that is less vulnerable to the moods of the moment; by increasing the self-reliance of those who, because they recognize the distinction between what is excellent and common, have less need to base their standards on what “everyone knows” or “goes without saying”; and by strengthening the ability to subject one’s own opinions and feelings to higher and more durable measures of truth and justice. In all these ways, an aristocratic education promotes the independent-mindedness that is needed to combat the tyranny of majority opinion that, in Tocqueville’s view, is the greatest danger our democracy confronts.

It cannot by itself protect us against this danger, but it makes a real contribution. Whether as leaders or citizens, the beneficiaries of such an education are in a better position to make up their minds for themselves. Many of course fail, just like everyone else. However, in their case failure is the abuse of a special trust that their education confers on them to guard against the mob mind that our democracy is always at risk of becoming.

“The Assault on American Excellence” is available from Simon & Schuster.

MORE: Yale professor: Some humans are better at being human