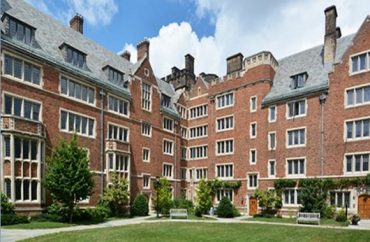 Professors: ‘Find a new name for Calhoun College before the start of the fall semester’

In the wake of Yale University’s recent decision to keep the name Calhoun College, hundreds of faculty have signed their names to a series of letters that denounce the decision and call for a reversal.

In early May, 396 professors — many from the STEM fields — signed an open letter to university president Peter Salovey urging a reconsideration. In late May, Yale’s Faculty of Arts and Sciences Senate followed suit with a letter of their own that garnered 335 signatures, the Yale Daily News reports.

Even though Yale decided to keep Calhoun’s name for the residential college, earlier this year three portraits of the man were removed from the building’s interior to appease concerns that posting images of the seventh vice president of the United States of America creates an oppressive and offensive atmosphere. Calhoun was a slavery advocate.

But many faculty say that step doesn’t go far enough and have continued to lobby for a complete name removal.

In the letter signed by nearly 400 faculty in early May, it claims that the name of a college “does not only represent a university’s engagement with a historic legacy; it also conveys the honoring of an individual.”

“These are our students’ homes; the places where they process the challenges and high expectations we hold them to, attend college seminars, discuss and debate issues with their peers, eat dinner and have fun…a student’s college affiliation goes with them when they leave Yale,” the letter states. “We are doing these students a disservice by forcing them to live unnecessarily under a brand so deeply associated with slavery.”

Professor of Molecular Biophysics Andrew Miranker authored the letter and he explained his motivations in an interview with The College Fix.

“Many faculty here are putting thankless and unrecognized hours, days and weeks of time on improving undergraduate climate and diversity,” Miranker said. “The Calhoun decision seriously undermined those efforts. It was important to me for our students to see that on this issue, at least some of the faculty were not aligned with Yale’s administration.”

For Miranker, writing and disseminating the letter was also an effort to push back against the misconception that STEM faculty “were generally deaf to the effects of disenfranchisement on our educational mission.”

He noted that his colleagues in the Humanities had been more vocal than their STEM counterparts about their concerns and had actively collaborated with undergraduates during what was, in his opinion, a “very difficult year at Yale.”

Miranker said he was surprised when he received a torrent of requests to sign the letter.

“The letter has garnered the signatures of more than half of the faculty. If you know anything about academics, getting more than half to agree on anything is unheard of,” Miranker said.

When President Salovey announced the decision to retain Calhoun’s name in late April, he explained that doing so will “encourage the campus community to confront the history of slavery, and to teach that history and its legacy.”

Students opposing the decision dressed in black and lined up in front of the college calling for a new name of “the college formerly known as Calhoun.”

Students who were in favor of the decision — a reported 45 percent — noted their reluctance to openly express their support for the administration.

“People fear the intense, vicious, personal attacks that seem to come from sincere disagreements in philosophy,” student Kevin Olteanu said at the time.

Miranker told The Fix that Salovey’s justification for refusing to strike Calhoun’s name was thin.

“There are numerous ways to meet our combined obligation of honoring the contributions of former residents of Calhoun College without forgetting about John Calhoun or the 1930s Yale that chose to honor him,” Miranker said.

“Our President faced a complex decision and had to satisfy many constituencies from alumni of Calhoun College to the Yale Corporation to the faculty and students. He underestimated the impact the decision not to rename Calhoun would have on our teaching mission. He also understands the value of learning from experience. He just needs to apply that understanding now,” Miranker added.

As for the second letter sent more recently by the Senate of the Faculty of Arts and Sciences, it claimed the decision did not represent “the best values of our university” and strongly requested to “find a new name for Calhoun College before the start of the fall semester.”

“We’ve made a decision,” she said. “We want to implement that decision and analyze how that implementation goes… We always knew that this decision would be controversial. There are many people who have been not perhaps as vocal but have privately supported it.”