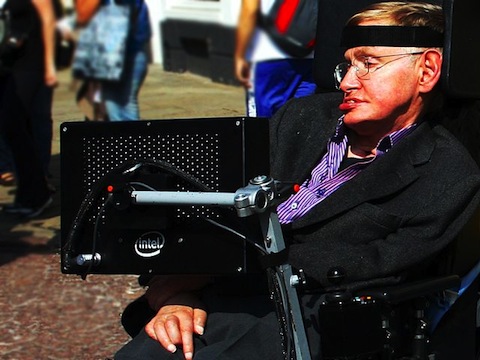 The famous physicist Stephen Hawking is the latest high-profile academic to back the “Boycott, Divestment, Sanctions” (BDS) movement. He has pulled out of an academic conference in Israel. In a letter to Israeli president Shimon Peres, Hawking says his decision to back out of the conference is a result of “his independent decision to respect the boycott, based upon his knowledge of Palestine, and on the unanimous advice of his own academic contacts there”

According to The Guardian, Hawking has been under pressure from organizers of the Israeli boycott:

In the four weeks since Hawking’s participation in the Jerusalem event was announced, he has been bombarded with messages from Britain and abroad as part of an intense campaign by boycott supporters trying to persuade him to change his mind. In the end, Hawking told friends, he decided to follow the advice of Palestinian colleagues who unanimously agreed that he should not attend.

It’s remarkable how so many academics who have built their careers on the premise that “academic freedom” must be protected and respected will simply toss that idea out the window when it comes to Israel.

Has not the Palestinian political regime also done things that Hawking disagrees with? Surely it has. Why does Hawking still engage with “Palestinian colleagues,” in that case. Why not boycott them as well?

Come to think of it–I’ll bet there are plenty of political policies in the British government that Hawking disagrees with. (The UK’s participation in the Iraq War perhaps?) Why then doesn’t Stephen Hawking boycott himself, since he is part of the UK and he obviously believes that scholars from nations whose politics he dislikes should be shunned and silenced.

Why does Hawking single out Israel as the one place in the world where politics justifies an academic boycott?

Here’s a bit of irony: Turns out, the microprocessor Hawking uses to run is famous computer-assisted speech program was developed, in part, by a team of Israeli scientists working for Intel. Nitsana Darshan-Leitner of the Israeli legal advocacy group Shurat HaDin suggested that perhaps, in the interest of consistency, Hawking should boycott his own voice.

“Hawking’s decision to join the boycott of Israel is quite hypocritical for an individual who prides himself on his whole intellectual accomplishment. His whole computer-based communications system runs on a chip designed by Israel’s Intel team. I suggest if he truly wants to pull out of Israel he should also pull out his Intel Core i7 from his tablet,” said Darshan-Leitner.

Here’s the fundamental question: Should academic discourse, free inquiry, and the exchange of ideas be subject to political suppression? Should academics avoid talking to scholars who happen to be Israeli? Apparently, Hawking thinks so because that is, in effect, what is happening here.

When one’s disagreement with a nation’s political regime justifies the shunning and boycott of that nation’s scientists and scholars, we are on dangerous ground. Hawking and other politically liberal scholars who participate in the academic boycott of Israel are hypocrites. They are quick to profess devotion to tolerance and academic freedom, but they don’t live up to those ideals–not when it comes to Israel, anyway.

Liberals who oppose the politics of Israel should think very hard before they decide to support an academic boycott of Israel. To do so makes a mockery of the very idea of academic freedom.