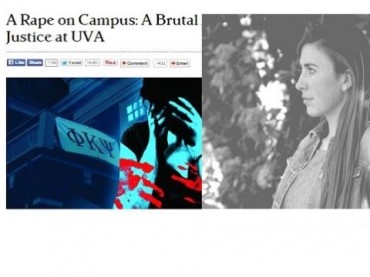 CHARLOTTESVILLE, Va. – The Nov. 19 Rolling Stone “A Rape on Campus” article by Sabrina Rubin Erdely details an account of a female student’s brutal assault at a fraternity house at University of Virginia two years ago.

As a student at the University of Virginia, as well as a sorority member, I can say with certainty that reading it punched a hole through all of our hearts here on campus.

So now – to learn the article is based on unsubstantiated, uncorroborated, and possibly completely falsified allegations – we are concerned, disappointed, even outraged. I personally have experienced a sundry wave of emotions regarding the whole affair: shock, sadness, confusion.

But mostly, I am mad.

I am mad … that nobody seemed to question this story from the start.

This was a gruesome, almost unbelievable story of gang rape, which is a disgustingly brutal and horrifying act.

However, Erdely describes how Jackie was gang raped by seven men in a fraternity house, including two student supervisors who looked on, making nine people involved that night. I struggled to believe these atrocities could have gone on for so long in a fraternity without anyone discovering, and that this many men could lack consciences and morals in committing to this “pledging” ritual.

Not to mention UVa fraternities conduct the pledging process in the spring – not the fall – which doesn’t add up when considering this alleged rape took place on a night in September 2012.

I am mad … that our university was misrepresented. Erdely describes “throngs of toned, tanned, and overwhelmingly blond students” at UVa, as well as other false exaggerations about the culture here. I’m not exactly sure which campus she visited, but when I walk across mine, I see immense ethnic diversity.

Moreover, it is hard to believe the claim that Jackie’s friends did nothing to help her when she came to them that night. That certainly doesn’t sound like the community I know and love at UVa.

I am mad … that people are afraid to speak their minds for fear of being labeled and attacked.

Although many of us readers, especially those at UVa, questioned certain aspects of the story, everyone seemed afraid to challenge it publicly at first.

In the back of our minds we asked ourselves: Why would this girl just make up this story? If I do speak out publicly asking for more evidence, will people accuse me of being pro-rape? What if people say I am ignoring the real problem at hand of sexual assault and rape and the way universities handle them by questioning the story’s reliability?

None of us wanted to say these questions out loud. But we had every right to.

I am mad … at the unfair light in which this article has painted Greek Life.

As a result of this story, many faculty members at UVa and activists in the Charlottesville community and beyond have banded together in favor of abolishing fraternities and sororities altogether. Already Greek events on campus have been suspended through the end of the year.

As a sorority member at UVa, I can speak to the incredible aspects of being in a sisterhood and the impact we have in our community through service and leadership.

What’s more, this has been an extremely difficult semester, with the disappearance and murder of Hannah Graham and two student deaths. We, the women who live in danger of sexual assault and rape, have come together in these hard times to support, love, and motivate one another toward change. To disband our support system would be antithetical to solving the problem.

I am mad … at the way Rolling Stone put the blame on Jackie last Friday when they admitted to publishing a factually incorrect story.

They stated their “trust in Jackie was misplaced,” until they discreetly edited their apology Saturday to change this accusatory statement. While we still wait for many questions to be answered, it is not and never will be the survivor’s fault.

Perhaps Jackie experienced post-traumatic stress disorder from that night, blurring facts and details of the events? Maybe Erdely changed or embellished Jackie’s story? We do not know what happened on that night, but we know that Erdely did not uphold her journalistic responsibility to confirm the existence of the accused and attempt to interview them.

That alone is enough evidence that Rolling Stone should have immediately acknowledged their own blame in the publishing of this story.

Furthermore, everyone seemed to largely ignore the credibility of Rolling Stone as a “news” publication. Let’s remember Rolling Stone has been notorious for publishing controversial, exaggerated stories to seize public attention. Recall its infamous magazine cover from last year, flaunting a photo-shopped, attractive headshot of the Boston marathon bomber. Americans were outraged at that horrible portrayal of the terrorist, by the same news publication that we immediately believed to be reliable in November.

Lastly, but most importantly, I am mad … on behalf of sexual assault and rape survivors.

An article by The Verge titled “Rolling Stone just wrecked an incredible year of progress for rape victims” explains how detrimental the destroyed credibility of this article will be for survivors.

They have struggled and could continue to struggle for years to come to convince others to believe their stories of sexual assault and rape, even though statistics show that the percentages of false sexual assault reports are exceptionally low. It takes one article like this to go viral, and then be proven inaccurate, to devastate the monumental progress that I have already seen taking place at UVa, and at other campuses across the nation.

Ultimately, this is a lesson about journalism. Journalism can be used to promote remarkable progress for issues like sexual assault and rape—issues that deserve to be at the forefront of public attention. Yet simultaneously, it can hurt this progress as well. We must question news reports, while recognizing that this does not mean we are questioning the issues at hand.

College Fix contributor Emily Irwin is a student at the University of Virginia.