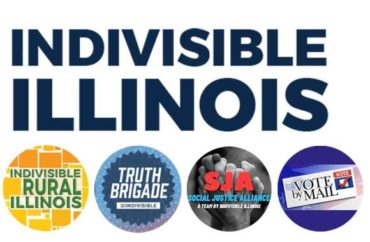 Indivisible Illinois “stands indivisible against campaigns of hate” and “empowers local progressive groups by uniting and amplifying voices through networks, resources, and public platforms,” according to its website.

The meeting, clips of which were posted by YAF, was titled “Zeroing in on the Young and Vulnerable: How Right-Wing Organizations Mobilize High School and College Students.”

She expressed a concern about the conservative movement’s portrayal of Ronald Reagan as a Christian, according to YAF.

A far-left group in Illinois hosted a fear-mongering Zoom call teaching their members how to organize against the growth of YAF, absurdly accusing the organization about spreading "white nationalism." 🤣🤣🤣

One of the hosts is a professor at a local community college. 👀 pic.twitter.com/MwtTZWaBxF

The presentation told attendees how they could undermine YAF and young conservatives and expressed concern regarding YAF’s campus lecture programs, student activism and new office in Dixon.

Indivisible Illinois also took issue with YAF’s coverage of sexually explicit material in the Young Adult section of the Dixon Public library, calling it a “nationwide propaganda blitz,” according to YAF.