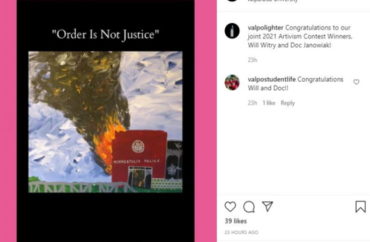 A painting of a Minneapolis police station going up in flames won a recent award from a student-run art magazine at Valparaiso University.

“Order is Not Justice,” a work by Sam “Doc” Janowiak, received a first-place award in the annual “Artivism” contest run by The Lighter, a campus magazine featuring promoting poetry, short stories, and visual arts.

Janowiak told The College Fix the title of the painting was inspired by Martin Luther King Jr., who wrote in his Letter from Birmingham Jail:

“I have almost reached the regrettable conclusion that the Negro’s great stumbling block in his stride toward freedom is not the White Citizen’s Counciler or the Ku Klux Klanner, but the white moderate, who is more devoted to ‘order’ than to justice; who prefers a negative peace which is the absence of tension to a positive peace which is the presence of justice.”

The painting is a reference to the torching of Minneapolis’ Third Precinct police building three days after the death of George Floyd at the hands of police last year. The man found guilty of setting the fire, 23-year old Dylan Shakespeare Robinson, was recently sentenced to four years in prison and two years of supervised release, plus ordered to pay $12 million in restitution for starting the fire.

Faculty advisor Mark Wagenaar told The College Fix the Artivism Award contest is run every year and exists alongside other student writing awards.

Wagenaar said the submissions are judged by “someone who’s willing to do it for a hundred bucks, so our options are limited.”

“As our budget was something like zero this year, we had two recent alums judge the contest, with faculty judging the other writing contests,” he said. “This year’s judge was, apparently, drawn to heavy-handedness. These days you can never be too didactic.”

The painting was selected for the award by Michelé Strachota, a recent Valparaiso creative writing graduate who now reviews books on YouTube.

Janowiak said to him, “artivism” is “the advancement of a social cause through the arts.”

“It is essentially the flip-side of the coin that is propaganda; it’s another means of promulgating an idea and a belief through the medium of popular culture,” he said.

A spokesperson for Valparaiso did not respond to a request for comment from The College Fix.

Janowiak said he prefers art that is “subversive and multifaceted.”

“If it offends enough people, it’s probably going in the right direction,” he said.

“If the ideas are fundamentally commendable, and the cause is fundamentally virtuous, the result is even more likely to be sound. Personally, my own art has yet to attain this status. It might be offensive, yes, especially to the people who desperately wish to convince others that its content is not directed at them, but the technical skill and conceptual execution have a lot of room to grow.”

“I myself helped organise three of the four demonstrations in Valpo over the summer, protesting the racially-motivated police killings of African Americans,” he said.

Janowiak said the best piece of art he’s ever created is a short story called “The Rain Burned the Crows,” about a girl “slowly dying alone in the ashes of a future Earth destroyed by nuclear war, wasting away her days writing doomed notes to fling into an uncaring and empty world.”

He said he didn’t want people to jump to conclusions about his political affiliations based on his artwork.

“It may seem to someone who doesn’t know me, or from a genetically outside perspective, that because I support the cause of African American civil rights in the twenty-first century that I am a Democrat, or otherwise a liberal of some stripe,” he said.

“This could not be further from the truth. I firmly contend that the criticisms of the sort made in my artist statement apply every bit as much to Democrats as to Republicans. The problems in this world have no party affiliations, and so neither do the solutions.”

The announcement of Janowiak’s award on Instagram was “liked” by the Valparaiso Department of Communications, several fraternities and sororities (Janowiak is a member of Sigma Phi Epsilon), and a number of student government accounts.