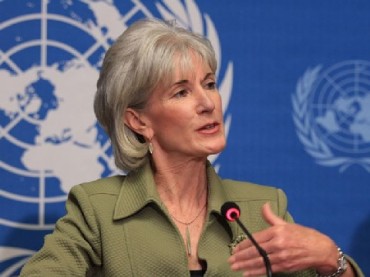 U.S. Health and Human Services Secretary Kathleen Sebelius helped kick off the Conference of World Affairs at CU Boulder earlier this week by complaining that America has spread its “bad habits,” such as smoking, to other countries.

“Globalization spread some of our bad habits,” she said. “Tobacco use and over consumption. (Non-communicable diseases) are killing people in every country and every part of the world.”

It was one part of a keynote address at the annual conference that ignored the massive stumbling blocks the attempt to socialize medicine in America has faced under her tenure.

Her talk on Monday offered hardly any praise for Obamacare – save the claim it helps prevent diseases.

“Part of Affordable Care Act is to diagnose the illness before it becomes a problem,” Sebelius said. “It is something that has been underreported and there are real preventions being made for this country.”

She launched her talk by citing the swine flu outbreak in 2009, saying the United States could not tackle the crisis “alone.” She called for global partnerships, saying health doesn’t end at “national boundaries.”

Sebelius suggested globalized healthcare means the advancement of medical cures and healthier people, who can then contribute more to the economy.

Global health, as Secretary Sebelius added, is also a security and wellness concern.

“Dr. Friedman once said, ‘The health and security of U.S. is only as healthy and prosperous as the rest of the world,’” she said. “One million people enter the U.S. alone. Seven million international people traveled through Dulles. And 826 million travel across country.”

“It’s a whole new way to catch a cold. Airplanes also carry countless goods, people, and products into the United States. Eighty percent of fish come out of seas not our own. Fifty percent of fruit come from outside our borders.”

Secretary Sebelius cautioned that the economy only told one part of the story regarding this globalization of health, saying national security is also a factor. For example, terrorists may develop bio-weapons.

The United States should not only be a leader in combating these threats, but should adopt a “willing partner” stance in finding solutions, she said.

Sebelius said that, despite the American innovations that have revolutionized human health globally, America lacks in other areas, such as women’s health and family planning mechanisms.

“We trail behind the world, and frankly, it’s inexcusable,” she said. “Healthly mothers mean healthy babies. We are letting down generations.”